Ethiopia – Fr Chrys Saldanha: “I have come to realize that there is nothing better than placing my life in His hands and letting Him do with me as he pleases” 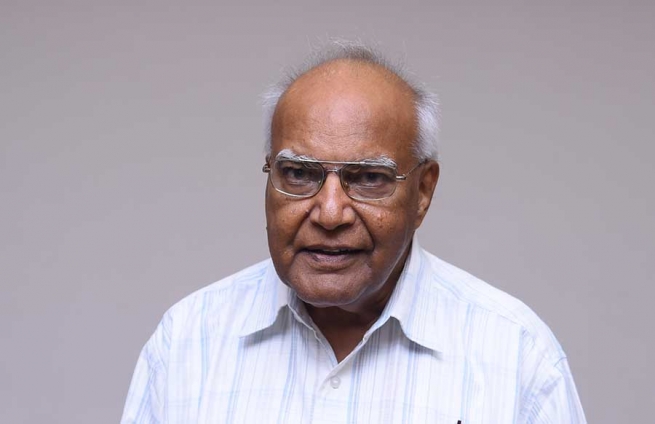 (ANS – Addis Ababa) – He dedicated himself to Salesian Formation and served as Provincial. He also coordinated the launch of Project Africa... Fr Chrys Saldanha did many things in his Salesian life. 50 years after his priestly ordination, here is an interview- testimony that can say a lot for and to all young Salesians.

How would you describe these past 50 years of priesthood?

I have loved my Salesian priesthood as a special gift of God to me, and have enjoyed it to the full. Most of my time and energies these 50 years have been spent in the area of formation, but I have also done a stint in authority as Provincial. In both cases, I have always considered my role to be one of helping persons to grow - in faith, in their vocation, in their love for Jesus and Mary, in their attachment to the Salesian Congregation and to the Church. And it has been for me a most fulfilling undertaking.

Some memorable events in these past 50 years?

Among the many memorable events are those connected with Project Africa. When I took over as Provincial of Mumbai in 1982, Salesian India (which at that time comprised 6 Provinces) was just beginning to send missionaries to Kenya, Tanzania and Sudan as part of its contribution to Project Africa. I was asked to look after all the Salesian missionaries from India on behalf of the Provincial Conference of India. These Salesian presences in Africa came to be established as a Delegation of my Province. Six years later, when I laid down office as Provincial, the Delegation was sufficiently developed and organized, and the Rector Major erected it as a Vice-Province.

During those years, I made several trips to Africa. My last one as Provincial was perhaps the most memorable. Halfway through my trip by road to visit the house of Tonj (Sudan), we (i.e., a couple of Salesians and myself) were stopped by guerrillas who fired warning shots in the air. However, when they found that we were missionaries, they let us go.

Later that day at Tonj I felt moved to find some 20 lepers gathered in front of our house and singing away for a full hour in the blazing sun, just to express their happiness and gratitude for the Salesians who were looking after them!

On my return to the town of Wau, I learned that I was stuck: there was no plane in the coming days, and maybe weeks, to take me back to Juba in the South, thence to Nairobi, and onwards to Mumbai. And so, I was forced to fly north to the capital, Khartoum, where the Comboni missionaries kindly gave me hospitality. Next day, I discovered, to my dismay, that I would have to remain there another four days for a flight to Nairobi. On the third day of my stay there, I received a surprise visit from the Comboni Provincial. He had heard of my presence in the Sudanese capital and, since he was running short of personnel, he came to make a free gift of their institution in the city (a school, workshops and a parish) to the Salesians. That was how Divine Providence arranged for us Salesians to begin our presence in Khartoum!

Some challenging moments you had to face in these 50 years?

I had a major problem on my hands in very first year as Provincial. Several Salesians of the Province were in favour of our giving up Don Bosco High School, Matunga, our first Salesian institution in Mumbai. It was felt that our school was not catering to the poor. I didn’t have the heart to take such a drastic step, but chose instead to qualify a couple of Salesians in social work and to launch an evening oratory for the boys of the nearby slums. Some time later, evening coaching classes were begun for the poor boys who were weak in their studies. Finally, the admissions policy of the school was changed to give a priority to Catholics and the poor. That made a big difference to the physiognomy of the school. There was a bit of resistance from some of the well-to-do parents but in the end, and especially because of the wholehearted commitment of the teachers to join with us in taking care of poor youngsters, the school took on a whole new orientation, and there was no more talk of giving up the school.

A couple of years later, the Bishops of “North India” invited the religious Provincials of the South to invest personnel and resources in the northern half of the country where the presence of the Church was very limited. Heeding their request, we began new works in the northern and interior parts of our Province - which meant reaching out into the poorer areas of the country. At the same time, we began a work for street-children in the city of Mumbai.

After my stint as Provincial, I was given a new challenge, viz. to launch a Renewal Centre in Bangalore for the Salesians of the whole of India. Some eight years later, I was asked to move to the Generalate in Rome to collaborate with the Councillor for Formation, a task that, over a period of eighteen years, brought me into contact with the reality and the challenges of formation all over the Salesian world.

Your advice for our young confreres

I have learned over the years that there is nothing better than being open and available in the matter of religious obedience. I didn’t expect the various “obediences” I received in my life, but I accepted them as God’s will. Now, as I look back at my whole life, I can see that God had a plan for me that I never imagined, one that has brought me a lot of happiness and fulfillment in my life. I have come to realize that there is nothing better than placing my life in His hands and letting Him do with me as he pleases: it gives me great serenity and happiness.