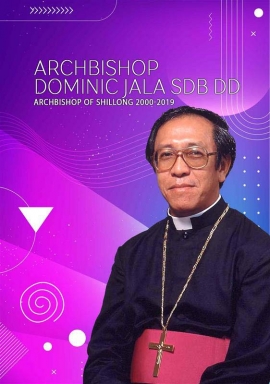 (ANS – Shillong) – 10th October: It has been one year since the tragic demise of Archbishop Dominic Jala, SDB, and Catholics across the city observed the solemn occasion by paying tribute to the late Archbishop of the Roman Catholic Archdiocese of Shillong. A Holy Mass presided by the Archbishop of Guwahati Archbishop John Moolachira and concelebrated by five other bishops, priests, religious and few invited guests was held at the Cathedral of Mary Help of Christians in Laitumkhrah. Meghalaya Chief Minister, Conrad K Sangma together with other ministers also attended the Holy Mass.

After the Holy Mass a short program to commemorate the day was held, in which two books on the Archbishop were released. This was followed by the visit to the tomb of the Archbishop.

In the afternoon, a commemorative service was held at the late Archbishop's parental home. During the function a life size statue of the archbishop was unveiled by the Chief Minister, Mr Conrad Sangma, accompanied by Father John Madur the Diocesan Administrator.

The people still missing him, this is the feeling that gloomed across the state. While all the services and functions were streamed live via Facebook and YouTube channels of various media houses in the city, many books and commemorative volumes were also published and released in honour of this “people’s bishop”.

Speaking on the occasion Chief Minister lamented that “we still have a void because of his sudden demise”.