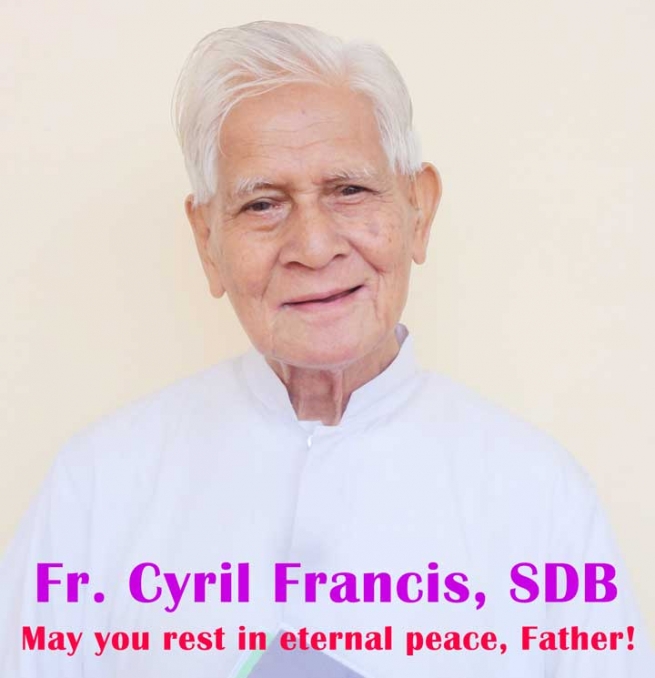 (ANS – Anisakan) – During the memorable visit to Anisakan and Mandalay (October 2016), the Rector Major, Fr Ángel Fernández Artime at his departure gave his Salesian Cross to the most senior SDB of Myanmar, Fr Cyril Francis. Four years later the “Ah Pho - Grandpa Cyril” - as Father Cyril was known around Anisakan - went peacefully and well prepared to the house of the Father. After 91 years of life, 69 years as consecrated Salesian of Don Bosco and 59 years of priesthood Fr Cyril has entered the well-deserved joy and peace of eternal life.

The last 6 years of his life he spent again in Anisakan, first amongst the novices as their confessor and then for the last two years cared for by many was able to offer his old age suffering through his prayers. Well aware of his coming end, Fr Cyril received the sacrament of the sick on 18 October and was well prepared for his encounter with his Creator and Redeemer.

One of the first Burmese Salesians of Don Bosco, 5th of six siblings, he did his initial formation in India: novitiate in Kotagiri, postnovitiate in Sonada and theology in Shillong. After his novitiate he continued his IA and BA at Calcutta University. His practical training was one year in Sonada and one year in Mandalay (Lafon memorial high school). At his priestly ordination (by Bishop Ferrando in Shillong) he chose as his motto: “Surely, Goodness and Mercy shall follow me all the days of my life: and I will dwell in the house of the Lord forever.” (Ps 23:6)

After his ordination he returned home to Burma and since 1962 was appointed as Catechist, then as Prefect of Studies, Bursar and later also as Rector at Nazareth House Aspirantate, Anisakan. He was always ready to serve wherever it was necessary. When the foreign missionaries were repatriated in 1966 he became the Rector of Nazareth. Then he took charge of the young Salesians in formation, teaching Philosophy and taking charge of Aspirants.

When the Salesians took over the Apostolic Prefecture of Lashio, Fr Cyril was posted between 1975-1990 as parish priest in the very poor area of Kyaukme, taking charge of nearby parishes without any priest as well (Pamaichyun, Kachin villages around Pang Pau, Shan villages around Thibaw) as a mobile missionary with never-ending energy, founding these Catholic communities. From 1990 a new bishop, Charles Bo, SDB, took Fr. Cyril as his Vicar General of Lashio, already elevated to a Diocese.

After long years of heavy missionary work, in 1990 the Superiors sent him again to Anisakan as confessor of the Aspirants and Novices. But Oratory work for the children of nearby villages also kept him very busy. And in his advanced age he was still busy for 20 years with a very charitable apostolate on behalf of some 150 poor families and widows for their daily livelihood - distributing rice, oil, dry ration, salt and chilly. Without fail this monthly help continued until 3 years ago.

He was a zealous missionary, strong devotee of Mary Help of Christians, faithful and consistent friend of poor people with the outreaching heart of Don Bosco. Fr Cyril was really a good role-model, an affective and effective model to many of our younger confreres during his long years of Salesian consecrated life.