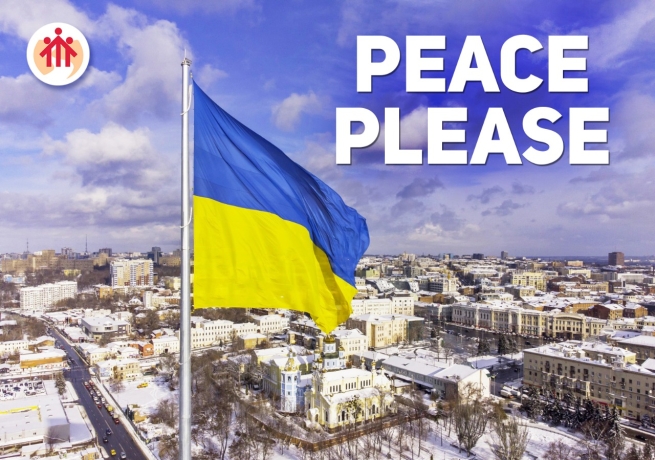 (ANS - Lviv) - In the current reality that Ukraine is experiencing, the Salesians present in the country are doing everything possible for the young and the needy population, describing the situation they see with their own eyes and raising their prayers to God, along with requests for solidarity and help from the international community.

“Unfortunately, the situation continues to be tragic. Let's get ready for even tougher times. We do not know how long this war will continue, and then we must be ready for even a long period,” said Fr Mykhayl Chaban, Superior of the "Mary Help of Christians" Vice-Province of Ukraine of the Greek Catholic Rite (UKR).

“Dear brothers… There are many victims among the soldiers, but also among civilians. The whole world is waiting for immediate decisions to stop the aggressor. Throughout Ukraine, there is a danger of bombing. Today our capital, Kyiv, is suffering a lot, as well as the areas bordering Russia. People are fleeing their homes,” adds Fr Chaban.

The Salesians are present in several major cities of the country: Kyiv, Lviv, Zhytomyr, Dnipro, Odessa, as well as in Korostyshiv, Peremyshlany, and Bibrka, and remain close to the population until the last moment, trying to be those who give hope to the disillusioned population.

What Salesians are already working on and seeking support for is:

- the arrangement of a shelter to protect at least the children and young people of the state schools, and also all the people who will be in need;

- food and shelter for the people who will be taken in (food, beds, mattresses, blankets, etc.)

Currently, the Salesians are already welcoming about a hundred minors in their shelters, giving priority to the children from orphanages, and hundreds more are expected to be hosted in Lviv with the arrival of the first refugees from the east of the country.

"Dear brothers, I ask you first of all to pray for Ukraine and also to be welcoming if refugees arrive in your country. I thank you for all your help and support,” concludes Fr Chaban.

For his part, Fr Marcin Kaznowski, Provincial of the "St Hyacinth" Province of Poland-Krakow (PLS), which also has works in Ukraine, communicated: “The outbreak of the war in Ukraine is an immense drama that has affected the local society and all of Europe. Our Salesian confreres are among those whose lives are at risk. The confreres are aware of the dangers that there may be, but they are serene and confident in God's providence. All have informed me that they are ready to remain there to accompany their faithful and the young people entrusted to them in this difficult time.”

The invitation that Fr Kaznowski addresses to the whole Salesian Family is to pray “for peace in this country and for the grace of repentance for those who are making themselves masters of the life and death of others”; and he concludes by entrusting the Ukrainian population to Mary Help of Christians.