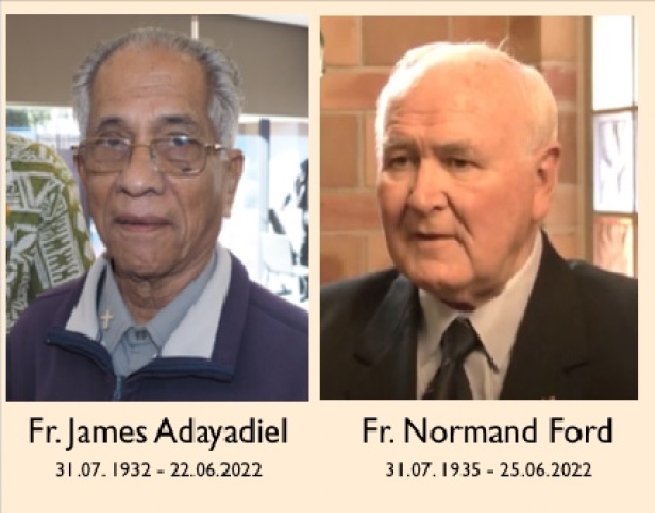 (ANS - Melbourne) - In recent days two Sons of Don Bosco from the Australia-Pacific (AUL) "Mary Help of Christians" Province reached the Garden of Heaven: Fr Norman Ford and Fr James Adayadiel. So many Salesians throughout the East Asia-Oceania Region and beyond remember them fondly.

Fr Norman Ford SDB passed away peacefully at Mercy Place in East Melbourne on 25th June, at 8:00 am. Fr “Norm” was 87 years of age. He was a professed son of Don Bosco for 69 years, and a priest of the Catholic Church for 58 years.

Born in 1935 in Ballarat, Victoria (Australia), Norman completed his Salesian novitiate in 1953. After making his final profession on 31st January 1959 in Sunbury (Melbourne), Cl. Norman studied theology in Italy and was ordained a priest by Bishop Giuseppe Cognata at Valdocco, Turin (Italy) in 1964. Since his return from Italy, Fr Norman spent most of his life and ministry around the formation of young Salesians in training in Melbourne.

Being a highly academic and a simple consecrated person, Fr Norman also spent more than 40 years of his life in tertiary education and research, particularly in the fields of philosophy and ethics. He served as a Master of the Catholic Theological College in Melbourne and continued to teach philosophy for many years. He had won worldwide recognition for his scholarship in the field of bio-ethics, had an outstanding publications record, and was a regular participant and invited speaker at international conferences. Fr Norman also was the Foundation Director of the “Caroline Chisholm Centre for Health Ethics” in East Melbourne.

In recent years Fr Norman was a member of the Salesian Community in Brunswick. Yet, due to an urgent need for extra care, 3 years ago he moved into Mercy Place in East Melbourne as a resident.

The funeral was held on Thursday 30th June at St Margaret Mary’s church in Brunswick North, at 10:30 am.

Fr James Adayadiel SDB passed away at the Home of the Little Sisters of the Poor in Auckland, New Zealand, at 8:15 pm on 22nd June. Fr James was 90 years of age. He was a professed son of Don Bosco for 66 years, and a priest of the Catholic Church for 56 years.

Born in 1932 in Kerala, India, James completed his Salesian novitiate in 1954. After making his final profession on 24th May 1960, James was ordained a priest by Bishop Marianayagam in 1964.

Fr James was among the Salesian pioneers who came to Samoa in 1979 to begin the Salesian mission with the young. He was a master builder who established several churches in Samoa. Under the leadership of the late Cardinal Pio of Samoa, he served as the Chancellor of the Archdiocese for five years. All together he spent 30 years in the islands of Savaii, Upolu, and in American Samoa.

In 2010, Fr James came alone to New Zealand to begin another Salesian presence. He was then joined by a number of other Salesians - Fr Mika (RIP) and Fr Matthew VZ. As a Salesian priest, he served in Massey and Avondale parishes for nearly eleven years before moving into a clergy retirement home in Auckland in 2021.

A requiem Mass for Fr James will be celebrated in Auckland in the middle of the first week of July.

The Requiem Mass, funeral, is planned for 6th July 2022 at St Paul’s, Waimumu Road in Massey, Auckland (New Zealand) beginning at 11:00 am.