RMG - Michele Capasso: "The Salesians are the operational arm of Christianity" 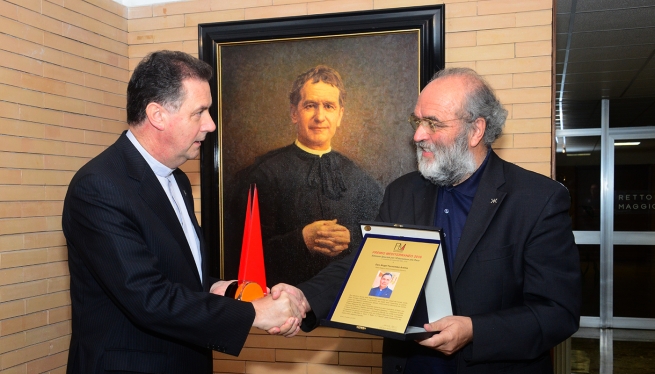 (ANS - Rome) - Michele Capasso, a Neapolitan engineer and architect, has completed more than 500 works in various countries of the world. He was severely affected by the massacres committed against innocent victims in areas affected by war. He decided as a result to take a break from his work and his professional commitments, first to help the people of the former Yugoslavia and then to build dialogue and peace. Today he is conferring the "Premio Mediterraneo 2016 - Special edition for Education to Peace" on the Rector Major, Fr Ángel Fernández Artime.

How did the Mediterranean Foundation start?

The Mediterranean Foundation was established more than 27 years ago, on the initiative of the presidents of various countries, interested above all in creating a space for ​​peace, against war and against conflicts. Since that time we are committed to promoting dialogue through a thousand initiatives involving young people, children, women, migrants, and through education. These initiatives are very practical as our motto goes: "transform the love of power into the power of love."

Who receives the prize?

This award is for seriousness, for the quality of work and for practicality. People are awarded the prize if they do something for the common good. It is considered the highest award after the Nobel Prize. Many of those who have received this award are personalities from the field of religion - Cardinal Etchegaray, Cardinal Martini, the Latin Patriarch of Jerusalem, and many others, who have worked for peace.

This year’s award is special. Why?

Every twenty years there is a special edition of the award for something not included in the regulations. We look for a personality that symbolizes that theme. With great joy and pleasure, after consultation with the Arab and Islamic world, this award, a special edition for peace, is being conferred on Fr Ángel Fernández Artime for all that the Salesians have done in the world.

Why have you decided to give the award to the Rector Major?

The Salesians share our commitment to peace through dialogue. The people who work with us have had many contacts with the Salesians throughout the world. During these 27 years we have come to know the value of the work of the Salesians. We appreciate especially their humble commitment to young people and to those in need. We want to imitate their example of doing. We want to be recognised for what we do, not for what we say. The Salesians are the operational arm of Christianity that applies the Gospel every day.