Australia – Cardinal Bo, SDB: “Ours Is a Nation on Exodus. It Was a Promised Land” 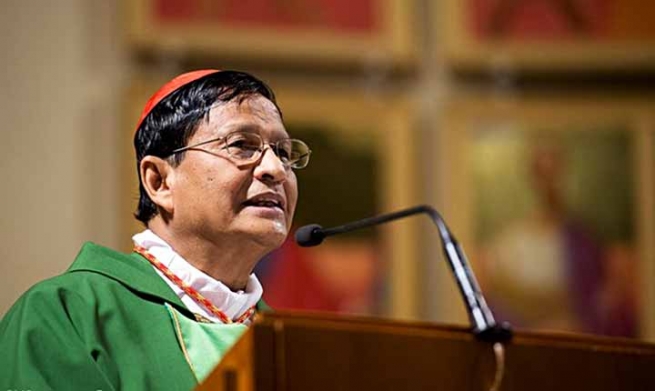 (ANS – Sydney) – Cardinal Charles Bo, SDB, the Archbishop of Yangon, was in Sydney on June 10 as a part of a tour arranged by “Catholic Mission”, Pontifical Mission Societies in Australia, whose major Church Appeal in 2018 is raising funds for innovative education programs backed by the cardinal in his native Myanmar. Cardinal Bo celebrated a public mass at St Mary's Cathedral in Sydney and here we share his inspiring homily.

Dear Brothers and Sisters, good to see you all today – in our sacred fellowship of breaking the bread and breaking the word. Australia – I remember you for many things – for welcoming our refugees from Burma when the country made their life difficult. The Burmese community here, especially the Catholics have settled well and they are safe. As a nation, you are great hosts welcoming everyone from war-affected countries. Though you may not have the statue of Liberty, each one of you raised your arms and hearts to welcome the people. Australia is the city set on the mountain of hope for millions.

I also remember when a monstrous cyclone Nargis struck us ten years ago it was the Australian church that rushed to our help through Caritas Australia and Catholic Mission.

The country’s problem can be traced to lack of opportunities to the youth. Church hopes to forge a future for youth through education. We have planned a national Seminar in which we wish to open the doors of opportunity through Education. Education as Emancipation of historical bondage, Empowerment of millions of our youth and Employability of our men and women otherwise forced to unsafe migration.

Australian people through Catholic mission stood shoulder to shoulder in our struggle to bring dignity to our poor youth. We have opened schools in remote areas. We have built churches where there was none. We have educated our poor seminarians and sent them back to remote areas. You have shared the bread of compassion. We march ahead because people like Catholic Mission accompanies us in our mission. This is sincerely a pilgrimage of gratitude to the Church and the graceful people of Australia.

I am very glad to be with you to break the Word today. In the Gospel passage Jesus stands at a critical juncture: doubted by his family and accused by the religious elite of the day. Christ came as a good news of God’s love for the whole creation. People were touched by him, healed by him, raised from the dead by him. He preached with great authority that the poor and the lame went back with the message: No one spoke like this man. The power Jesus had on the suffering and marginal people was astounding.

But Today’s Gospel opens up with a scene where the Pharisees demonize him. His power was stigmatized – accused of being a power broker for the devil. They say: “He is possessed by Beelzebul! By the prince of demons he is driving out demon”

Demonizing people, stereotyping people – Jesus was a victim. Imagine today in many parts of the world people belonging to a certain culture, a certain geographical areas are demonized and held as violent people. Walls go up to prevent the people.

As Pope Francis bemoans the world has forgotten the art of building bridges but is becoming savvy in building walls. The popular culture today does not see “brothers and sisters” in suffering people. Parochial nationalism is diluting faiths. As cultures and religions are stigmatized there is a global paranoia against the others. People see Beelzebul in babies and women and children.

This is the challenge to Catholic community today. Christ was considered as a ‘crazy’ by even by his family. The world needs crazy people. Crazy Christians. Crazy Christians like Mother Teresa who go and collect the dying and infirmed from the street and nursed them back to life. But sadly as Pope Francis pointed out, many traditional Christian nations have stigmatized, demonized and dehumanised other communities.

Unresolved conflicts have resulted in millions leaving our shores, as unsafe migrants, refugees and IDPs. Ours is a nation on Exodus. It was a promised land – with treasures over the land and below the land. Human hatred and fear of the other have made our people’s life an unending Exodus.

Fear of our own brothers is a genetic curse of humanity. It started with Cain. There was no Jew, no Christian, no Muslim, and No Buddhist in the first pages of the Bible. You see death, gruesome murder of brother killing brother. The first pages of Bible are soaked in blood. The Old Testament enumerated at least 100 wars with causalities more than a million.

Pope Francis mandated to Catholic Church in Myanmar only one Mission: Never repay vengeance with revenge. Be the Peace makers. Never repay hatred with hatred he said during the Public mass. “Do not wound, but heal the visible and invisible wounds of this nation” he poignantly requested Christians.

Christ urged his followers in his Sermon on the Mount: Blessed are the peacemakers for they will be called as children of God. In Myanmar, we are a small church but we are an active peace maker. As a Church, we are in a vantage point of being a peace makers in Myanmar and we have taken this role with vigour. Last year, for the first time, we organised the interreligious initiatives for peace. Just last month we managed to gather a group of Religions for Peace from all over to visit the leaders and affected people in Rakhine state. We keep our options open by meeting all the stakeholders: civilian and military.

You as a Church have been in communion with us in this sacred pilgrimage of peace. During Nargis time and afterwards Australian church was generous in supporting quality teachers and building schools. School s are the new temples of hope. Thank you very much for your generosity. Many remote communities see education because of your generosity. Thanks to Catholic Mission and Caritas Australia.

Returning the Gospel once again, I am reminded of the phobias and demonizing Christ underwent in his community was staggering. Conflict emerged and Christ ended on the cross.

History repeats itself today. Nationalism and hatred are becoming normal. Pope stands on the hilltop crying out to show mercy to people in the margin and those who are at sea. Hatred against all starts inside, says Buddhism. The very violence thoughts are provoked by avidya (lack of knowledge). Peace is possible only when the mind is at peace and receives knowledge with critical perception.

The conflict between the evil and good continues. Christ tried to dispel the darkness. Myanmar Church strongly believes education will be the light set on the hilltop that would dispel the darkness of hatred and bring harmony and peace to our people.