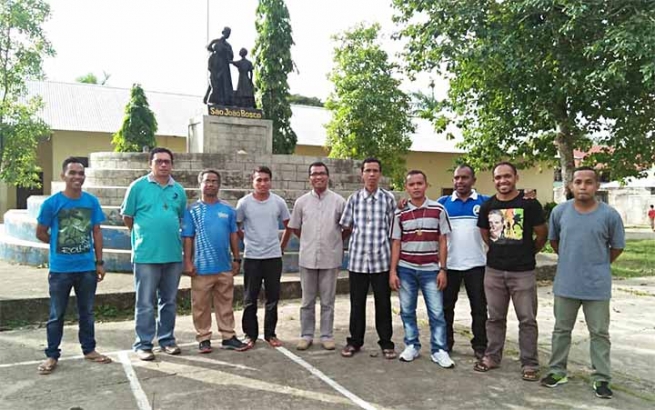 (ANS – Los Palos) – As the EAO Salesian Brothers Congress which will be held in Vietnam is approaching, the Salesian brothers in the Vice-Province of Timor-Leste (TLS) got together for the pre-congress meeting. The meeting was held in the Salesian Community of Don Bosco Los Palos. The meeting was led by Fr. Manny Pinto, SDB, the provincial delegate for Formation. Aside from the 10 Salesians brothers and Salesian priest in-charge of various level of formation in the vice-province, the 25 pre-novices were also present in this formative encounter.

The meeting began on June 9, with an opening talk from Br. Adriano de Jesus who gave emphasis on one and the same Salesian vocation. He encouraged the Brothers and the pre-novices that God calls us first and foremost to be Salesians. This is the central point of our vocation. Only when we appreciate our Salesian vocation, we begin to discern between being a Salesian brother or a Salesian priest.

Then, the encounter continued with a short talk by Fr. Anacleto Pires, the current novice master of TLS vice-province. Fr. Anacleto presented to the Brothers and the pre-novices the theology of consecrated life and highlighted that whatever states of life that we are in, the most important call of God for us all is to be holy. The encounter continued with the talk of Fr. Manny Pinto. He reminded those present in the meeting about the importance of the two dimensions of Salesian vocation. He emphasized the fact that these two dimensions of Salesian Vocation do not mean that one is superior to the other, but they complement each other. Both Salesian Brothers and Salesian Priests consecrate themselves for the young. Don Bosco becomes model for both dimensions of Salesian Vocation.

In the afternoon session, the time was given to the Brothers and Priest formators for sharing and exchanging some insights as part of the journey towards Salesian Borther’s Congress in Vietnam. The encounter terminated with a picture together as a remembrance of such a precious encounter which enables the province to look deep into the Salesian Brother vocation.