Italy – GC28: unity and diversity on the world horizon and in local communities 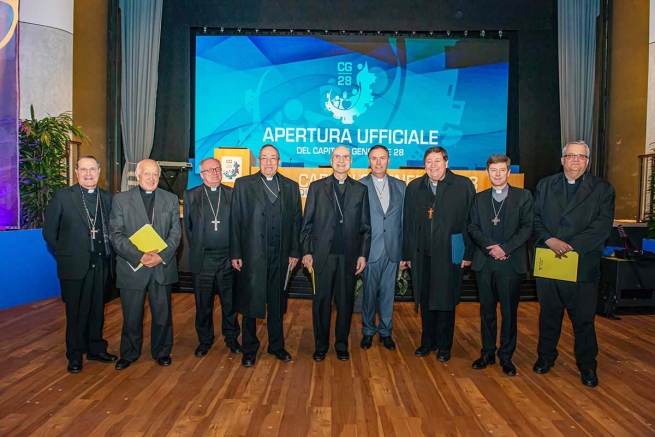 (ANS - Turin) - Diversity of faces and multiplicity of languages are the expression of the variety of cultures and situations in which Don Bosco's educational experience is embodied. There is no lack of fraternity, which creates bridges on every occasion in which there is a border to overcome and a thought, an experience, a tradition and a history to understand.

The Salesians of the world, and with them the groups of the Salesian Family, the lay people and lay collaborators, the young people, are all represented in Turin-Valdocco in the 28th General Chapter.

Unity and diversity are clearly present, in the respect and acceptance of the opinions of others, especially when they express the diversity in which the Salesians and the educational communities they represent are active.

All of this was amply represented in the first week of the Chapter work, starting with the Rector Major's Report, presented personally and with the collaboration of the General Councilors. Three whole evenings dedicated to their examination followed in Regional groups coordinated by the Regional Councilors.

It is not an assembly of shareholders of an industry, not a political assembly with factions with conflicting interests that are economic, of prestige, or ambitions: repeatedly and in different words, the ecclesial nature of this ample and numerous assembly has been marked and highlighted every day by prayer, in linguistic groups, too. And the week that begins includes the celebration of Ash Wednesday and the beginning of Lent.

Ample time was spent in three mornings to meditate and pray on the three nuclei into which the central theme is divided: Salesians for today's young people. And Saturday 22, the official and formal beginning of the GC28, the follow-up to what was clearly indicated in an article of the Constitutions of the Salesians of Don Bosco was followed: "Through the General Chapter the whole Society, letting itself be guided by the Spirit of the Lord, seeks to know, at a specific moment in history, the will of God for a better service to the Church."

Chapter work continues with the Presidency of the Rector Major and the coordination of the work led by the Regulator Fr Stefano Vanoli. The week also begins with the activation of the procedures necessary for the proper functioning of the assembly in all its components: approval of the Regulations, appointment of secretaries and moderators, establishment of study commissions.

Not to be missed, the fact that paper has almost completely disappeared and photocopies rendered useless. Each chapter member moves in the company of his PC: in it, there is everything he needs to read; with it, he shall proceed to vote; connected to it, each capitular has already experienced the simultaneous translation of the interventions.