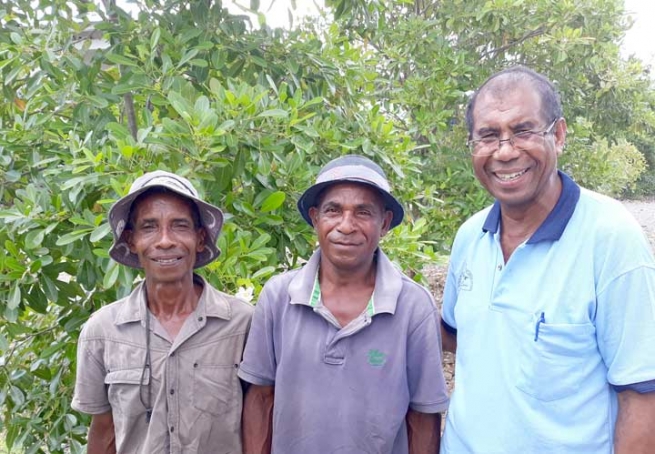 (ANS – Fatumaca) – The population of East Timor is about 1.3 million and 60% have less than 24 years of age. So East Timor (Republica Democratica de Timor Leste - RDTL) is an ideal territory for the Salesians. Here is an interview with the Timorese Salesian Brother, Marçal A. Lopes.

My name is Marçal Amaral Lopes and I am a Salesian Brother. I was born in the town of Lospalos, in the State of East Timor, on 31 March 1962. I am the second son of a family of five sons and two daughters. At the moment I work in a Technical Institute frequented by boys and girls in the town of Maliana, in the district of Bobonaro, on the border with Indonesia.

How did your vocation story unfold?

In May 1977 I began attending the Don Bosco Technical Institute in Fatumaca. I enrolled there for two reasons. The first was that attendance at that school was free. Secondly, since it was a Technical Institute, I could learn a profession and then look for a job to help my family.  I had no idea of becoming a Salesian.

At the end of the three-year course, after the final exams, the Principal of our Technical Institution (courses for carpentry and mechanics), Br. Carlo Gamba came to talk to me. Brother Carlo Gamba, SDB was a Salesian missionary from Asti-Italy, who founded that school in 1973. That day, while we were walking around the school, he asked me: "Have you ever thought about becoming a Salesian? I answered: 'No!' Br. Gamba asked me again: "Could you think about it?" I told him that I wanted to go to that school to learn a profession and then come back and help my family. Brother Gamba continued: "Why don't you try to see if that's your way?". The way he said it motivated me to think about it.

I left the school with this invitation in mind. I prayed and then said to Br. Carlo: "Yes, I'll try". And Br. Gamba helped me write the letter of application to the rector of the house to begin my path as a postulant. I was admitted and followed the path of the novitiate, always in Fatumaca. I made my first profession on 8 December 1982 and my perpetual profession on 19 March 1990.

What is the situation in your Salesian setting where you work?

At the moment I am working in a co-education Technical Institute (Escola Secundária Técnica Vocacional Dom Bosco) in Maumali. It is located in Maliana, Bobonaro district of Timor Leste, on the border with Indonesia. It is a government boarding school, but the management was entrusted to the Salesians of Don Bosco for a period of 50 years, according to a memorandum of understanding signed between the Salesian Congregation and the Timor Leste Government on 10 March 2010. The courses offered by our school are free of charge. The school began its activities in 2014 and is attended by 112 students, 70% boys and 30% girls - all of them are boarders. We offer 3 years courses of General Electricity. Students who successfully complete their studies obtain a diploma issued by the Ministry of Education. The girls' boarding school is run by a group of staff. Boys and girls participate together in all school-related activities, including meals, moments of prayer and recreational activities.

In order to reduce the costs of running the school, students and Salesians carry out various extracurricular activities: plant vegetables, take care of a piggery, chickens etc. This is also a way to educate young people to acquire some skills for self-sustainable life, not to depend on others for everything. The aim of the school is to help students become good Christians and upright citizens and, at the same time, also follow some emerging vocation signs.

What are the boys and girls and young people of Timor like?

Considering the statistic figures of our very young population, it can be seen that there is great hope for the country if young people receive the right attention from all figures in society (parents, government, educational institutions, civil society). Young people are probably the same all over the world. Young people in East Timor are no exception. They dream of opportunities to live better, to have a voice in society, to contribute to the development of their country. They need models that can influence their lives. We can help them in this regard by being with them, accompanying them and offering them different opportunities for life.

What are the most important results achieved in your TLS Province?

The most important result of the Vice-province of Saint Callisto Caravario is to witness that our Past Pupils are engaged in various work activities, in government (some in top positions), in different non-governmental organisations, schools and other institutions. It is a source of joy and satisfaction to see that the faith they received when they studied with us has remained alive in many of them and is manifested in their commitment to serving their fellow citizens in need.

What do Timorese people think of the Salesians?

The Salesian missionaries arrived in East Timor already in 1927. A young Salesian, future Saint (Martyr) Callisto Caravario was also part of this first group. Since the situation was very difficult, the Salesians had to leave. The second expedition arrived in 1946. Considering the time spent and the activities carried out by the Salesians of Don Bosco, our country in the field of education and social works, the people appreciate the Salesians as a religious institution that contributes to the development and wellbeing of the people of Timor Leste on a religious, intellectual and human level. Our charism, in particular our presence with young people and people of all ages, in some communities our preferential option for the poor, the preventive system makes us unique among the other religious congregations working in East Timor. People ask us to be consistent with our religious consecration. They want to see us as men of God, who are consecrated and committed to following Christ in daily life.

What are the most notable challenges?

There are two and they are connected.

Our economic dependence: Our SDB Province depends largely on the Congregation and other foreign benefactors to manage our apostolic works. We depend almost completely on the Congregation for the formation of the future Salesians. For other activities of the Province we receive support from various parties (government of East Timor, Salesians and benefactors from Australia, South Korea, Japan, Europe…).

We work with the mentality of a community, a local community, provincial community and within the Congregation world community. At the Provincial level, it is a question of working as one Province, therefore with a sense of belonging to a wider community that goes beyond the local sphere. In this context, the sharing of opinions, ideas, human and financial resources among all the 13 communities of the Province must be improved in the implementation of the Overall Province Plan.

How do you see the future of the Salesians in East Timor?

There are currently a total of 172 Salesians in East Timor, including 15 novices, living in 13 different communities. The Salesians will still play an important role in Timor in the future, taking into account the following aspects: the number of young people, the country's educational system, which still requires many improvements and the overwhelming majority of our society is very young.