Papua New Guinea – “The start of a new beginning!” 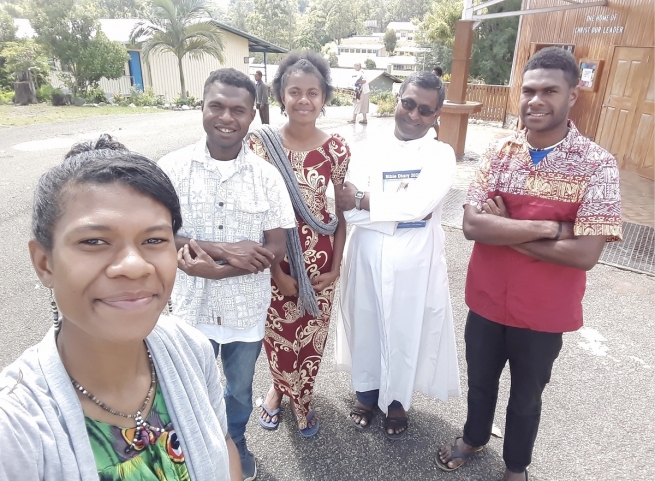 (ANS - Kumgi) – “I ended up at ‘Don Bosco Simbu Technical College’, Kumgi, in 2018, to study Electro-technology. I had not applied there because I didn't know this institution even existed! That was the start of a new beginning!” Isabella Saleu is a young girl who now attends a Salesian school in Kumgi. But her past was not easy and she risked wasting her future. Meeting Don Bosco was the turning point in her life! Here you can read her story.

We had moved back from Vanimo due to my father’s job transfer in 2013 whilst I was in grade 10. When we arrived in Port Moresby, I couldn’t continue my education as there were no spaces in secondary schools. So from the rest of that time to the end of the same year I stayed at home. Also, within that same year, we had been moving from one suburb to another after short periods of time. This eventually it took its toll on me.

It all started when we moved again. In this suburb we stayed for the longest period of time (a year and a half). That gave me enough time to make friends. These friends didn’t go to school so when I met them I felt like I belonged to the ‘gang’. I started to do what they did - smoking, drinking alcohol and aimlessly roaming the streets of Port Moresby. We would meet anytime during the week and go for a “cheap beer”, drinking to see who’d get drunk quickly or how many more rounds we would be able to go through - just for the fun of it. This was the first time I had tasted alcohol.

Our neighbors probably noticed me leaving the house every day and coming home before my parents arrived from work but otherwise it was just me and my “friends”. I soon started to smoke, becoming a nicotine addict - and it showed on me. Occasionally my parents would ask if I was sick. Out of embarrassment and pity for myself, I cut off family and longtime friends. I would skip family gatherings just to avoid questions on how sickly I was or how disgusting I looked. Sometimes when we weren’t having our drinking sprees, we would take bus rides to schools and hang around outside doing nothing. At times we’d wait around bus stops chewing betelnut, just watching people.

To change me, my parents permitted me to stay another year at home but it only made things worse. I became rebellious. I continued what I did and they continued to worry. In 2015 they had finally put me to school to repeat year 10. My batch was then in year 12. Although in school, I’d still go for my drinking bouts with my so-called friends.

Despite being a Grade 12 Business Student, I don’t know how but I ended up at Don Bosco Simbu Technical College, Kumgi, in 2018, to study Electro-technology. I had not applied there because I never knew that this institution existed! That was the start of a new beginning. God was working for me. He was there to ensure there would be no further damage to myself. It didn’t take me long to see the saving hand of God, first of all by sending me to Don Bosco. I never really attended Mass let alone go for confessions so I hadn’t received the Holy Communion for about 4 years. When I had made my confession in the Shrine of Don Bosco, Kumgi, I just couldn’t speak. I remember just crying. After that confession, I was a new person. Amazingly I had easily just given up on every addiction. I was tired and ashamed of that life and wanted nothing to do with it.

I learned that the Salesians worked with young people like me and had a system of education, the Preventive System. It has three pillars: Reason, Religion and Loving-Kindness. Of these 3, loving-kindness was my favorite. I learned how to love myself and appreciate my past, I learned to love other people and to put their needs first. I learned to love God deeper and I started to appreciate life for the first time. It then made me realize that maybe some of my other friends might be going through their own struggles so I tried to reach out to them and surprisingly God brought me into contact with a lot of my own friends who did have problems and would ask for a prayer or just for someone to hear them out. The Salesians gave us students an opportunity to serve by using their gifts and talents. They would hold a lot of programs and activities and allow students to take lead. I was so amazed as I had never been asked to organize an event or animate a group of people so I volunteered for them all. As Bosconians we were encouraged to excel in studies but most importantly to build the right character and attitude teaching and helping us get rid of our vices.

Sometimes I would follow the priests to out-stations or villages to celebrate Mass. The walking or crossing rivers or even long drives didn’t bother me, I was so happy doing so. I would encourage my friends, Catholic and non-Catholic alike to take part in Mass animation, in organizing activities, in volunteering for work around campus, to take the lead when the need arose. Thus they would share their gifts and talents with others. I was always a friend encouraging others to be good and to do good. Sometimes I’d laugh at myself because life before Don Bosco was a selfish one but here I was loving strangers and wishing them nothing but the best. From being such a gloomy, boring person, I had grown to be a very lively and joyous person. This new girl and the new attitude amazed me. The Salesians were helping me grow. I couldn’t believe what was happening to me. Don Bosco had taught me how to live and how to love.

Being a young person has a lot of challenges as we struggle to figure out what to be influenced by. It’s the peak years of one’s life. One may be affected by social standings; the need to fit in, family situations, peer pressure in school, where to live, unemployment, social media trends, are just a few. But if you allow the grace of God to be your safe haven, you will experience contentment and satisfaction in life. God didn’t promise a perfect life on earth nor does he expect perfection from you. He just wants you to come as you are. He knows you as he is your Creator. You may think that your past is so dark and that you don’t deserve the ‘Light’ but God wants to be your only ‘Light’. Your past will not keep you bound unless you allow it to. Every day presents an opportunity to seek God’s forgiveness because his love for you is strong and constant. Change is possible if you humble yourself and allow God to work in you. When you are at your weakest point, God’s grace is perfected in you. I had totally forgotten I had a past like this, until I was asked to do a video sharing on Youth Alive on the Gospel passage of John 10: 11-18. I smiled and shared my story for the first time in 4 years.

Indeed, he is the Good Shepherd and he has saved me and brought me back to his flock before it was too late. I owe the Salesian Mission my life. St. John Bosco is my role model, and the Salesians are like my other set of parents. I hope one day I will be somewhere in the world as a Salesian missionary too, helping other young people reach their potential. I can’t wait for more opportunities to reach out to more young people because my dear boys and girls, YOU MATTER. In fact God is searching for young people like you to send as well. Will you humble yourself, allow change and be the one he sends?