Great Britain – “Honey and Apples”: helping children of all faiths understand each other 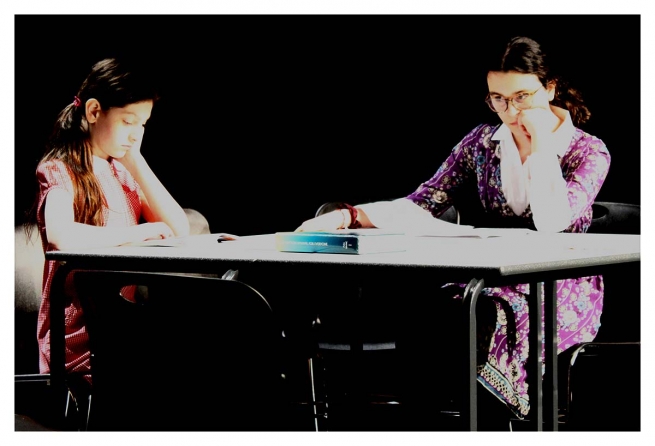 (ANS – London) – At the end of April, some of the Year 7 students (aged 11-12) from “St John Bosco College”, Battersea, London, put on a short play entitled “Honey and Apples” which was written specifically for them. The play was based on the experience of children during the Holocaust. The school invited some external guests from the local Jewish community, and the rest of the audience was made up of Year 11 students (aged 15-16) who were revising Judaism for their GCSEs.

The play was beautifully presented and sensitively acted under the direction of Elvira Tallo, one of SJBC's PGCE students, who, although she is not a teacher of drama, worked tirelessly with the students during their form time to bring out excellent performances. The guests and Year 11s loved the play and openly showed their appreciation.

When the students were asked to reflect on their experience of putting on this short but powerful drama, they acknowledged how difficult being involved in a production was, but found as they rehearsed more, it became easier. The teamwork aspect was appreciated: "you felt good, and as if you were part of a family", said one young actor, and they were all pleased that they learned more about Judaism, and had been able to help the Year 11s with their studies, even if it was "nerve-wracking" at times.

Although the subject matter was difficult, the young actors valued the opportunity to gain insights and to empathise with the real young people devastated by the Holocaust. "I found working on the play upsetting, but learnt how Jewish children must have felt, and it made me appreciate what I have," one student said, and another added, "It was amazing because I have never been in such an important play before."

The guests from the Jewish community were very impressed by the performance and the students' engagement with it. The Religious Advisor from the local Jewish home was impressed with how much the students incorporated about Judaism and the Jewish way of life into the play. He said he was touched by the interfaith nature of the event.

Another guest wrote to the school to say, "Clearly a lot of hard work was put into this by both you and the students and the result was really impressive. I think you should all be very proud of yourselves. This drama covered a very difficult subject very sensitively and also it also included an enormous amount of knowledge about Judaism. The result was really excellent. It was so uplifting to see the efforts that you and the school are clearly making to ensure that the students understand other religions. This is so important in these difficult times."

St John Bosco College Battersea is continuing to build strong interfaith links with all of the community, so that young people can come together to help build a world of greater understanding and harmony between people of all faiths... and none.