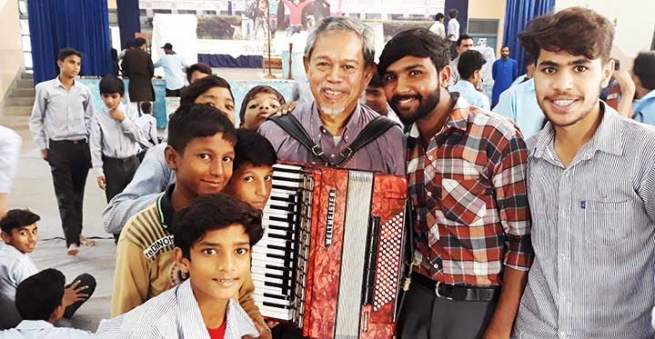 (ANS – Lahore) – What makes the Salesian Brother so special? Many are sharing the following conviction: “The Brothers are simply doing their ordinary youth ministry duties with an extraordinary love!” Brother Alex Abelgas (61 years old) from the Southern Philippines (FIS) province of Mary Help of Christians, arrived in Pakistan just a few months ago, but he has already conquered the hearts of the young people in Don Bosco Lahore (Technical Boarding School & High School).

After a brief two month exposure in Pakistan a few years ago, Br. Abelgas volunteered for this mission and he simply continues what he did during the past 40 years of Salesian consecrated life in the Philippines. He is always present the whole day among the young people as their “assistant” in the boarding house, in the refectory, in the football field, on the farm (buffaloes), in the vegetable garden. Simply put, the Brother is present among the young people as their friend, teacher and father, and as some Salesians have said, “the best practical trainee” they have ever had in this house!

Although Brother Abelgas does not yet speak perfect Urdu (Pakistan's national language), he delivers a good morning talk from the “romanized Urdu text” in the school assembly and is always mingling with the more difficult and naughty boys. Among his favourite tools is the accordion (music). The Salesians also pray that the promised fund from Turin, Italy will soon arrive and provide 10 small accordions for the future band, already known from his previous community in Borongan (Eastern Samar island, Philippines).

Soon after arrival, the only Salesian Brother present in the whole of Pakistan began guiding the Past Pupils through their monthly meetings, and a few days ago he was able to witness a significant step, the election of offices for the first Don Bosco Past Pupils Association on 27 October. His kind, patient and animating presence among the Past Pupils is very much felt.

Salesians in Pakistan hope that Brother Alex's presence will sow the seeds of the Salesian Brother Vocation among young Pakistanis one day. As Don Bosco's Salesians, they always dream about the complementary presence of Brothers and Priests, to make the mission and community witness complete!