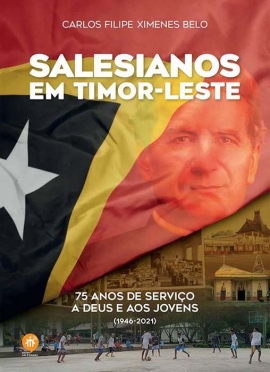 Bishop Carlos Filipe Ximenes Belo, SDB, Bishop Emeritus of the Diocese of Dili, Noble Peace Laureate, has written a book to be launched in September 22nd in Portugal. This book is written in celebrating the 75th anniversary of the second expedition of the Salesian missionary in Timor-Leste.

It was in 1946 that the second Salesian missionary expedition landed in Timor. In those times life was undeniably tough ones, marked by difficulties and toil but with God’s Grace and tremendous effort of the Salesian with the collaboration of the native people, the Salesians have made great things in this crocodile island in different aspects in contributing to the civilization of the people. In fact, a certain serenity and capacity to confront difficulties positively-with a fighting spirit but also joyfully dominated the situations.

Evangelization and Education are two things in the same coin which the Salesians are using in spreading God’s Kingdom in this tiny island.

This book is authored by a prolific writer at the same time as a bishop, a noble peace laureate, a spiritual leader, a father, a shepherd… The list could still be longer in describing Bishop Belo as people named him “the voice of the voiceless.”

As the book briefly summarized:

“The Salesians have been present in Timor-Leste continuously since 1946. Over these 75 years a lot of things has changed. political regimes have changed, the ecclesial fabric has changed, society has changed. But the Salesians of Don Bosco have remained constant in their commitment to evangelize and educate this island and its people.

In this book, Mgrs. Carlos traces the history of the Salesian presence in Timor-Leste using abundant original sources.

"75 years of serving God and to the young" is a beautiful summary of this story of education, theater and music, human promotion, crocodile hunting to feed the students, sometimes friendly, sometimes tense with the political authorities, of evangelization carried out in the most different contexts.”

This book is a helping tool to understand the historical, social-political, and the religious context at the time.