Mozambique – The question from the very start: "What can we do for these young people?". A history of international technical volunteering
Featured 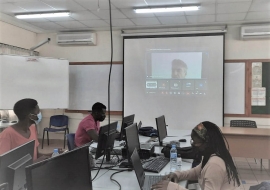 (ANS - Maputo) - At the end of July a new edition of the "Technical Volunteering" project active between Spain and Mozambique took place, a training project for Vocational Training teachers that before the pandemic took place every year in person and which this year, with travel restrictions due to Covid-19, it was done remotely, connecting Pamplona and Maputo.

At the end of 1992, Mozambique was a country ravaged by civil war. The peace agreements signed in Rome put an end to 17 years of clashes, but they still find themselves before a picture of hundreds of thousands of deaths and millions of displaced persons and refugees, including many young people who, grown entirely in the war period, have no academic or professional competence.

The Salesians, who had returned to Mozambique in 1952, and who had always been at the side of the population, then asked themselves: "What can we do for these young people?"

At the time, the presence in the country of numerous Spanish and Portuguese missionaries was providential. These, in 1994, involved two Salesians from Pamplona, ​​who reached Mozambique and started a dynamic of talks and actions with the state and local authorities and various international organizations. From that interaction the understanding that the fundamental card to be played to re-educate a generation of young people accustomed only to violence could be a typically Salesian option: Vocational Training (VT).

After this idea was shared with the Educational Community of Pamplona, ​​during the summer holidays of 1995, 12 of its members - Salesians and lay people - decided to fly 12,000 km and to start an exciting mission: to start VT in a country that previously, considered a colonial legacy, had completely eliminated it, and which was now at its limit in terms of possibilities and structures, but which was very rich in its greatest resource, that is children and young people, already well disposed to reconciliation.

That was the birth of “Technical Volunteering”, developed during the summer holidays and focused on the creation and development of Vocational Training in the country.

In that social panorama, the Salesian proposal was completely new and it became even more so with the creation of five VT Centers at different levels and sectors. And since the echo of these and so many activities reached the ears of the authorities, it was precisely these who recognized the Salesians as the "Educational Partners" of the Government, who involved them in the elaboration of plans and programs, and asked them not only to offer VT, but also to take care of the technical and pedagogical training of VT teachers.

Thus the Salesians of the Mozambique Vice Province, with the support from Spain, began the "distance" training activities. And then, in 2008, the "Instituto Superior Dom Bosco" in Maputo began face-to-face training as a university center dedicated to the preparation of VT teachers, which today involve over 600 students every year.

And in the meantime, Technical Volunteering continues, year after year.