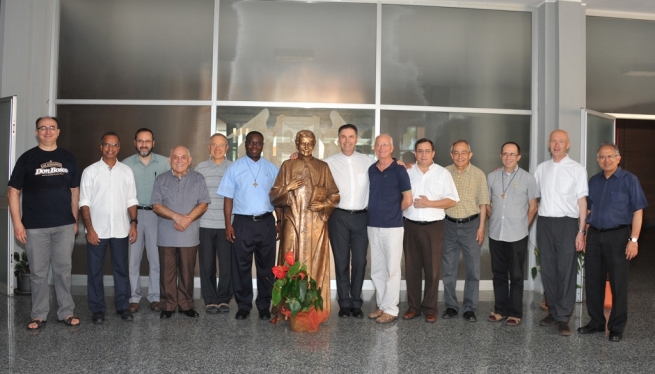 (ANS – Rome) – The first meeting of the team for the Revision of the Salesian Manual of Prayer, “In dialogo con il Signore”, has concluded on 10 July 2016 at the Casa Generalizia, Rome. The revision of the manual of prayer was requested by GC27 as part of the effort to become mystics in the Spirit.

The presence of Fr Angel Fernandez Artime, Rector Major, Fr Francesco Cereda, Vicar of the Rector Major, and Fr Guillermo Basanes, Councillor for the Missions, enriched the meeting at various moments. Fr Angel insisted especially on the worldwide nature of the congregation, which ought to be reflected also in the way we pray.

The team examined the Italian version of the manual in the light of theological and Salesian principles, asking what needed to be kept and what dropped, what updated and what left aside, but also what kind of manual was really needed for the Salesians of today: small and essential, or an updating of the existing manual, an examination of which can only evoke admiration for the theological competence with which it has been composed and the variety of its offerings. We need to keep in mind, of course, that there has been a digital revolution since the last printing of the manual in the 1990s, and one of the questions was how best to take advantage of the great possibilities that have now opened up.

One feature of the meeting was the use of the manual itself for prayer, a morning dedicated to lectio divina led by José Luis Plascencia, a sharing by Stefano Aspettati on Don Bosco’s Giovane Provveduto and subsequent manuals of prayer drawn up in the Italian speaking world, and a moment of prayer at the Catacombs of San Callisto, with a mass at the altar dedicated to martyrs Partenio and Calogero. The last item is especially worthy of comment: Partenio and Calogero were slaves who were pedagogues – educators who were servants of the young. A fitting reminder that all our prayer is to be permeated by the presence of young people, just as our life itself is meant to become prayer (Const. 95).

The meeting ended with a division of labour between the participants and the drawing up of a schedule of work. If all goes well, within a year it should be possible to have a working draft of the revised manual. It is only the actual study and work of revision that will reveal whether we need to go in for a small manual of essential Salesian prayers, with lots of material made available on the net, or else a substantial updating of the present guide – or perhaps both.