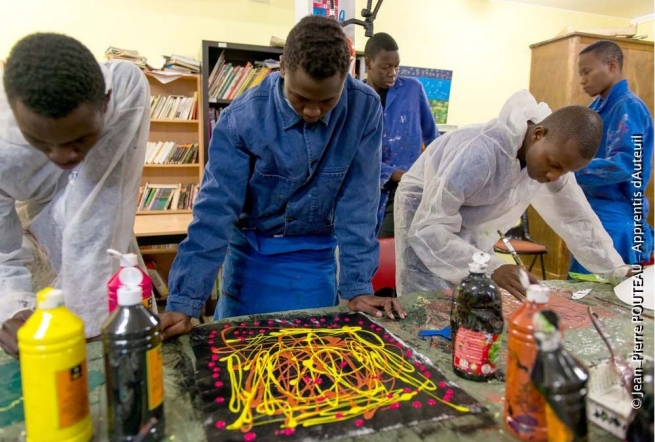 (ANS - Brussels) - Today thousands of young people migrate from their countries, fleeing from war and poverty. The Salesians in Belgium are mobilizing various forces to welcome them. What exactly is being done for  migrant minors in Salesian houses?

For over a year, the Don Bosco Institute of Tournai has been hosting five young people. Professor Flore Dubois conducts a French course for foreigners: "The boys are attending courses in all subjects: French, Mathematics and Science, English, Religion, Physical Education, Drawing and Music. There is spirit of cooperation among them. If someone does not understand an exercise, another helps. The older ones are motivated by the desire for a job. For most of them, their priority is to be allowed to stay in Belgium when they are of age."

Two hundred kilometres further east, at Remingtonamps, the Director of the Don Bosco School, Annie Michel, points out the difficulties encountered: "Our two classes are largely composed of Afghans and Syrians. It's not easy to handle their behaviour. I learned that children in their countries obey school rules, but from the age of 12 to 18, teachers are no longer involved. It is not easy for these young people to integrate into our rules. It seems to them a childish attitude. It is important to work hard on training, to integrate their code and avoid misunderstandings. Despite the difficulties, these young people have an amazing thirst for learning."

A good example of the difficulties is given by Saïdi, a 14-year-old Afghan. He escaped from the Taliban in Kabul and was welcomed for 6 months at the Don Bosco work in Hornu. Initially he had difficulty accepting the rules and schedules and wanted to change the structure. But when he knew it would not be possible, he changed his attitude: "Now, this is my home."

However, when he is 16, Saïdi will have to leave the centre in Hornu and, like so many others, will have to look for another "home" elsewhere. What will happen to him once a decision is made on his status as a refugee? Where will he carry his luggage?