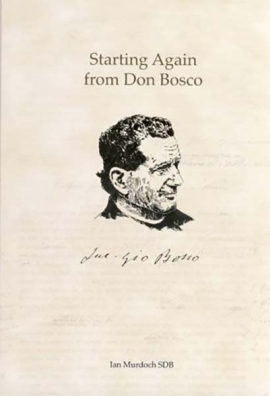 In 2006, when the Rector Major called for the congregation to “start again from Don Bosco to reawaken the heart of every Salesian”, Fr Ian Murdoch, an Australian Salesian priest, responded as a Salesian and a significant historian, by delving anew into the available material on the founder. His Provincial therefore felt he was ideally suited to preach all of the Spiritual Retreats across the Australia-Pacific Province in 2008. This book contains the conferences he gave at those retreats.

This collection of eleven lectures by Ian Murdoch SDB inspires us to get back to the heart of Don Bosco's mission by exploring aspects of his life. The collection was published posthumously, and an appendix includes a further reflection which Ian was not able to present.

The book is not a biography of St John Bosco, but a fresh exploration of significant turning points and challenges he experienced, to “help people overcome problems that may come in the future by learning from the past”, to quote Don Bosco himself.

The collection was published posthumously, as the cancer Ian had been treated for two years earlier returned early in 2008, and he died in January 2009, aged 60. An appendix includes a further reflection on Don Bosco's thoughts about the salvation of the young.

The relationship between past, present and future is echoed in the colour illustrations, which combine images from Don Bosco's day with those from our contemporary Salesian world, and with original artwork by Peter Gaskell and Val O'Brien.