Nigeria - A prayer for peace for a Country in turmoil 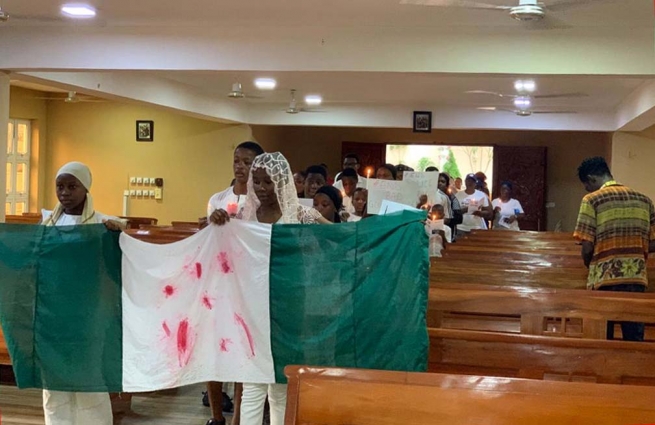 (ANS - Iju-Ishaga) - In the wake of the protests against police brutality, the young people of the "Don Bosco" Youth Center in Iju, near the megalopolis of Lagos - the continent's largest city, with over 20 millions of people - gathered for a moment of prayer to invoke from God the gifts of peace, justice and reconciliation, and to express solidarity with the victims of Lekki, a motorway exit near Lagos where in the night between 20 and 21 October several young people involved in protests against the police were killed.

"If we want to see that great Nigeria that we all dream of, we Salesians must do more in making our young people critically aware and educated, and so that they actively and positively engage in politics," said Fr Ekugbah Chikezie, SDB, a Salesian Nigerian who took part in the moment of prayer and solidarity.

According to the Fides news agency, the reason for the latest bloody events and protests is to be found in the extrajudicial killing of a young Nigerian by the "Special Anti-Robbery Squad" (SARS), which was filmed on video and which already in early October went viral on social networks in Nigeria. The SARS police unit, due to repeated abuses of power, was already particularly “indigestible” to a large part of the population.

Thus the demonstrators, who used #EndSARS as a hashtag on social networks, took to the streets, demanding that the special unit be dissolved and the police deeply reformed; that the officers responsible for the killing of unarmed Nigerians be prosecuted, and the families of the victims compensated.

But the protesters' demands quickly spread to broad criticism of government corruption, incompetence and impunity as human rights abuses and economic malaise continue in Nigeria.

After days of protests, the government decided to dissolve SARS, but on 13 October, the police chief in Nigeria announced the formation of a new police unit, the "Special Weapons and Tactics" (SWAT), which is expected to carry out tasks that had been entrusted to the dissolved SARS. According to many, however, it is only a change of name of the old unit; demonstrations still continue and in many states of the Nigerian federation a curfew has been imposed.

After the Angelus on Sunday 25 October, Pope Francis also expressed concern over the situation in Nigeria. "I follow with particular concern the news coming from Nigeria about the recent violent clashes between law enforcement agencies and some young protesters,"  said the Pontiff. "We pray to the Lord that all forms of violence will always be avoided, in the constant search for social harmony through the promotion of justice and the common good."