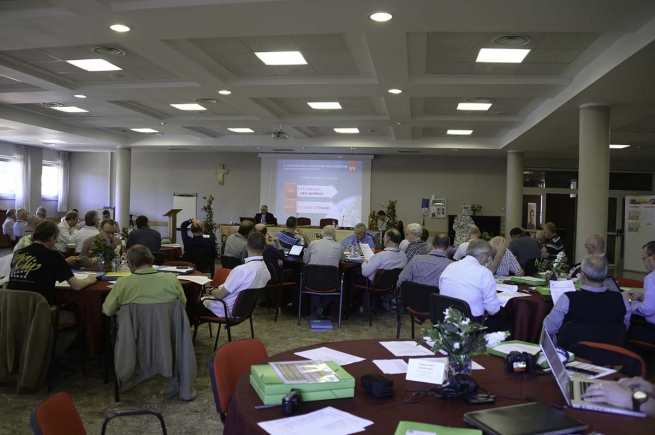 (ANS - Rome) - The Team Visit of the Atlantic-German zone of the Central and Northern European region opened yesterday, 16 May, at the Salesianum in Rome. The first day was used to introduce the work to be done, to address some of the major challenges and to foster the climate of exchange and sharing between the participants.

The Team Visit began with a solemn Eucharist at which the Regional Councillor, Fr Tadeusz Rozmus, presided. The homily was given by the Vicar of the Rector Major, Fr Francesco Cereda. "The Team Visit that we are beginning today invites us to experience unity in the diversity of the charism of Don Bosco," said Fr Cereda.

In his initial address, the Rector Major thanked everyone for being present. In addition to giving the general orientations of the meeting, he reiterated how the elements of fraternity, direct and personal exchange, common prayer and sincere dialogue are so important, as well as the times of reflection, evaluation and planning.

Fr Rozmus then gave some statistical data to better focus the situation: he underlined the reality of the region, and in particular the Atlantic-German Zone - which has 823 Salesians with an average age of over 65. Among the first challenges to be addressed he highlighted the quality of religious and community life, requalification in formation and the need for greater visibility of consecrated life.

In the afternoon, after a period of reflection in groups, Fr Cereda spoke about the redesign of the places where Salesians are present. This is "a process [which is] necessary to get a vision for the future", which should lead to a "shared vision" in the Provinces. This calls for and requires a "paradigm shift", which has to do with the tasks of governing and is implemented through a concrete programme of intervention.

In the evening, Fr Á.F. Artime shared his thoughts with all in the Salesian "Good Night".