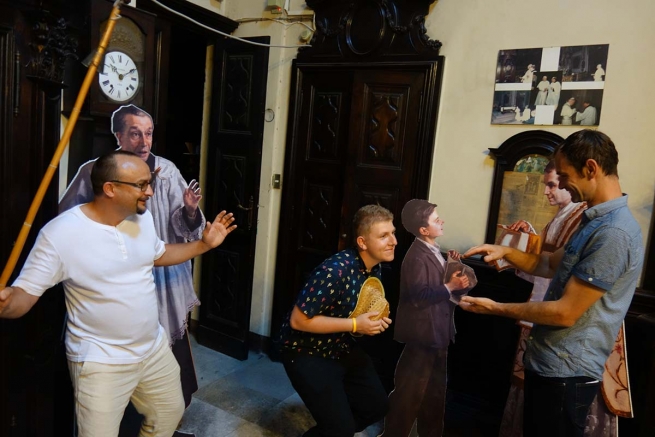 (ANS - Turin) - From July 4 to 9, a gathering of young volunteers and former volunteers from Slovakia, Hungary and the Czech Republic met at Colle Don Bosco, many of whom have already completed a year or more as missionary volunteers in India, Zambia, Mexico, Bulgaria, among the Rom in Slovakia ... Others are in preparation.

The purpose of this workshop was to satisfy the great need for accompanying volunteers once they return to their communities and countries of origin, in view of their often volunteers already much engaged in the pastoral life of their Province, as volunteers, and later often become themselves trainers of new volunteers.

During their stay at the sites of Don Bosco, the formation towards missionary spirituality was deemed excellent and very enrichening: the participants were able to learn of Giovanni Bosco as a child and adolescent apostle of his peers; Giovanni Bosco as a young man who struggles ardently and begins to realize his life project in Chieri; Don Bosco in Turin, who lives only for his young poor and who later on sends forth his missionaries from the Basilica of Mary Help of Christians...

The meeting was enhanced by visits, conferences, intense moments of prayer in a climate of fraternity and communion. Fr Pavel Ženíšek, SDB, Coordinator of the Provincial Association for Missionary Animation and Volunteering of the Czech Republic "SADBA", organized the activities, and Fr Daniel García, SDB, and Fr Martín Lasarte, SDB, of Youth Ministry  and Missions, led the formation.

These meetings held on the sites of Don Bosco were the beginning of a project for young volunteers and former Salesian missionary volunteers in Europe to meet, share their experiences and enrich their commitment in the footsteps of Don Bosco and - with him - to design the future of their lives in today's society.