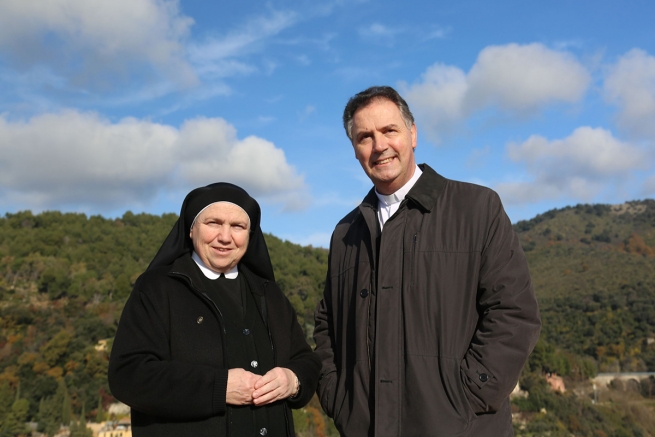 (ANS - Tivoli) – On 23rd December, the Rector Major, Fr Ángel Fernández Artime, visited the Generalate of the Salesians Oblates of the Sacred Heart (SOSC) in Tivoli for the first time. He was welcomed by songs of joy and a fraternal embrace of the Mother General Sr. Graziella Maria Benghini, of the Vicar, Sr. Maria Antonietta Sicari, of the General Council, of the numerous sisters from the various missions of Lazio and of the laity belonging to the Oblate family.

"Only God can do great things from small ones," said the Rector Major in the homily, "as it was with Jesus in Mary's womb and with John in Elizabeth's: two newborns and two women, yesterday as today, very little considered compared to the powerful of the earth."

"And this has so much to do with your history," he continued, "that of a religious Congregation belonging to the Salesian Family, founded by our dear and much tried confrere Mons. Giuseppe Cognata, born to go there where there are the most needy and the poorest, called to have little success in the history of humanity, but to have, instead, a lot more in the lives of those people who come to you."

Within the Eucharist the renewal of their promise was also made by some lay Salesians Oblates, and Fr Á.F. Artime expressed a paternal word and particular attention to each of those present, favoring a climate of true family.

At the end of the Mass, the 10th Successor of Don Bosco paused in prayer at the tomb of Msgr. Cognata, to then visit the room with the furnishings that the Salesian bishop used during his exile in Castello di Godego.

Mother Benghini illustrated to the Rector Major the heroic and humble life of Msgr. Cognata, whose mortal remains lie in the Chapel of the Generalate. Fr Á.F. Artime was then entertained by a representation with the children of the "San Giorgio" school and by the ancient songs of the first missionary sisters.

"We are grateful to the Rector Major for having shared a day of fraternity with the Salesian Oblate Sisters of the Sacred Heart, strengthening the bond that unites everyone in the great tree of the Salesian Family. The SOSC will always bear in mind the memory of this unforgettable day, assuring Fr Ángel their prayer," Mother Benghini said.