India – Rector Major to INS Province: “Continue to be beacon of hope for the youth” 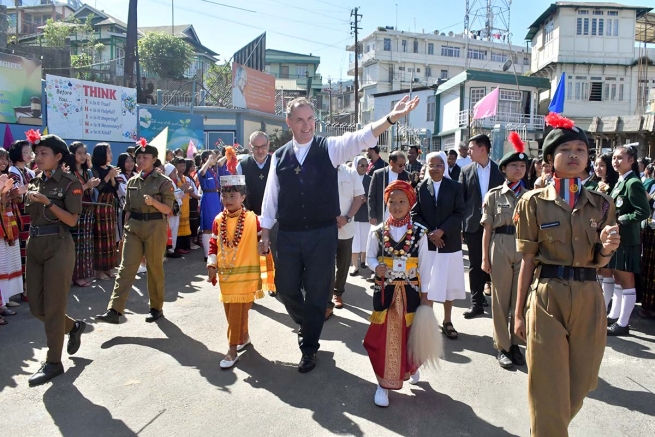 (ANS – Shillong) – Father Ángel Fernández Artime, the Rector Major of the Congregation, spent the last day of his maiden visit to the Shillong Province (INS) by visiting the Novitiate community, the Salesian Sisters and the tomb of Servant of God Stephan Ferrando, SDB.

At 7:00 am, the Rector Major celebrated the Holy Mass at Sunnyside - the Novitiate community of the Province. In his homily, he addressed the novices of both the SDB and the VSDB to be courageous in their vocations. “The Salesian congregation came into existence because of the daring answer by the first follower of Don Bosco,” said the Rector Major. He further added that Don Bosco did not intend to start a Congregation; Don Bosco was only trying to help the poor and abandoned youth. But because those first boys who stayed with him wanted to share his mission, the congregation was thus formed. “Be daring to answer to God’s call” the Rector Major asked of the novices. After the Holy Mass and breakfast, the Rector Major left for Auxilium Convent Provincial House.

At 10:00 am, the Rector Major was welcomed by the Salesian sisters and the students of Auxilium School. A short felicitation program was held to honour the Rector Major by the FMA Provincial, the FMA Sisters, the FMA Novices together with the school students. In his address to them, the Rector Major said; “Sisters and novices, spend your life totally for others and live your mission with hope and confidence.”

He then spoke on the three points to achieve this goal: firstly to be men and women of profound faith, secondly to spend one’s everyday life desiring to serve and to give, and thirdly to live in fraternity which, he said, is a big challenge for the religious. The Rector Major also encouraged the Sisters to overcome their personal diversity and learn to listen to the voice of the needy. He concluded his message by praying for God’s blessings upon the province and invited everyone to give themselves to the poor and to do good to the sea of young people in their mission.

He then proceeded to the next community at St. Margaret’s MSMHC Provincial House to visit the tomb of SoG Stephan Ferrando. He was welcomed by the school’s wind instrument band together with the school students, the teachers and the MSMHC sisters. He spent a few moments in prayer.

The Rector Major departed for the Airport at 3:30 pm. Before he left the Province, he gave the blessings of Mary Help of Christians. The Rector Major acknowledged the hospitality and the good response by the province of St. John Paul II, Shillong. He said he was deeply moved by the love and respect he received while moving from place to place.

In the visitors’ book of the Province he wrote, “Continue to be beacon of hope for the youth, be Don Bosco to them… I impart you my blessings.” He had tears in his eyes as he was escorted by the convoy and few confreres to the Airport.

It may be mentioned here that the Rector Major was declared by the Chief Minister of Meghalaya as the ‘State Guest’.