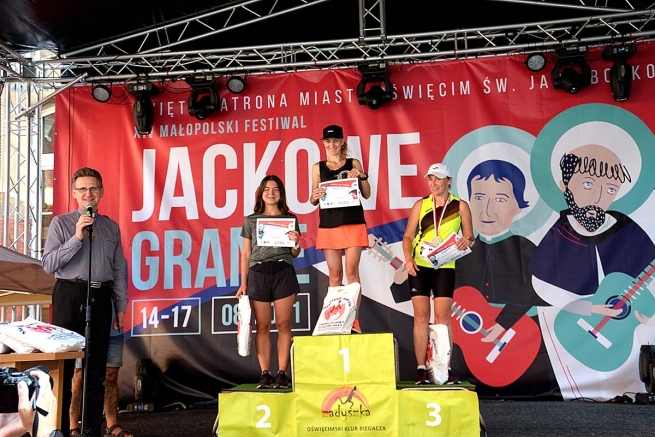 This festival consists of various types of events. The youngest were engaged in various games and workshops, while the older ones and adults preferred to attend the concerts of the different bands: "NiemaGotu" (musicians that composed the hymn for World Youth Day 2016), the group “4 strings” and the Salesian Youth Orchestra. The concerts were broadcast via the Internet.

Volunteers and animators from the Oratory of St. John Bosco in Oświęcim also organized the “City Game”, aimed at families. The game consists of overcoming 10 stations, located throughout the city, in each of which you must overcome specific tasks.

The tradition of this Festival every year is the Patronal Race, called in Polish language “Biegać jest Bosko”. The latter is now in its ninth edition. The race started solemnly at the monument of St. John Bosco and, despite the heat, the runners achieved excellent results.

The surprise of this year's edition of "Music of St Hyacinth" was the performance of the "Rozstroje" group, which presented a series of performances combined with interesting dance choreographies.

On 16 August, the Salesian Family of the Krakow Province gathered, also in Oświęcim, to celebrate Don Bosco's birthday. Representatives of the various groups of the Salesian Family came to the Mother House: Daughters of Mary Help of Christians (FMA), Salesians Don Bosco (SDB), Michaelites (CSMA), ADMA, Salesian Past Pupils, Don Bosco Volunteers (VDB) and Salesian Cooperators (ASC). The young people of the Oratory proposed a tournament with various types of competitions to the meeting's participants, which in the end was won by the Salesian sisters. The meeting ended with a solemn liturgy.

On the evening of the same day, the Holy Mass was celebrated for the citizens of Oświęcim, which was also attended by some representatives of the city authorities and the mayor of the city. During the Eucharistic celebration, five candidates made their promises as new Salesian Cooperators.

On the last day, the feast of St. Hyacinth -the patron saint of the Salesian Province of Krakow and of the Community of Oświęcim, was celebrated. This annual celebration was an opportunity to meet the Directors of all the communities of the Province and to honor those who celebrated the anniversaries of profession or priestly ordination. After the Eucharistic celebration, presided over by the Provincial Fr Marcin Kaznowski, the Province's "Mir" prize was awarded to two diocesan priests -Fr Zbigniew Irzyk and Fr Emil Midura, who are also Salesian Cooperators and who lead large groups of Salesian Cooperators in Jasło and Gogołów, in places where the Salesians are not present.

This Festival is organized by the Salesians, in cooperation with the Past Pupils and the Oratory and is co-financed by the municipal authorities.