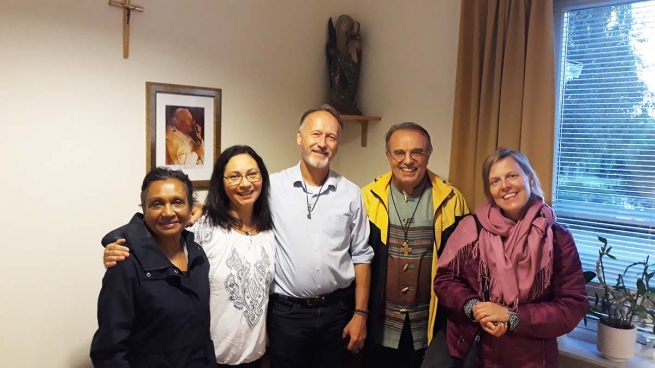 (ANS - Stockholm) - Last Saturday, 28 August, 2021, Fr Václav Klement, the Extraordinary Visitor "ad nutum" and "pro tempore", after spending two weeks studying the Polish language in Szczecin, at the Salesian community dedicated to St Joseph, began the Extraordinary Visitation to the “St Adalbert” Province of Polonia-Piła (PLN). The Province spreads across in four European countries: Poland, Georgia, Russia, and Sweden. Fr Klement began his Visitation from the Salesian community located in the Swedish capital, Stockholm. The conclusion of the Extraordinary Visitation is scheduled for next December 19, 2021 with the meeting of the Rectors and the Provincial Council.

The dynamic Province of PLN counts 260 Salesians spread across 32 canonically erected communities and has been led by Fr Tadeusz Itrych since June 2020. The Province houses also a post-novitiate in Poland, at Ląd, besides a good number of schools, social works, shrines and retreat houses. There are also various groups of the Salesian Family and the Salesian Youth Movement (SYM).

This first community that received Fr Klement's visit is made up of eight Salesian priests, animating two multicultural parishes in Fittja (since 2008) and Jacobsberg (since 2017) together with the Polish Catholic Mission (PMK) of Stockholm. Among the eight Salesian there is the first Salesian born in Sweden, while three of the others have already taken up the Swedish citizenship. The Salesian presence in the country, in fact, is quite old, and dates back to 1930, when a Salesian priest with two brothers arrived in Sweden from the German Province.

In the small Swedish Catholic community (150,000 faithful and 150 priests out of a population of about 10 million people) the Salesian contribution in this mission land is highly appreciated.

In the letter of introduction to the Extraordinary Visitation, the Xth Successor of Don Bosco, Fr Ángel Fernández Artime, asked to “strengthen communion with the whole Congregation, animate consecrated and apostolic Salesian life, and accompany the provincial community on its journey according to the 28th General Chapter and the 'Valdocco Option'.”

The Extraordinary Visitation will be characterized by listening to the Salesians, lay people, collaborators, and young people in their own language.