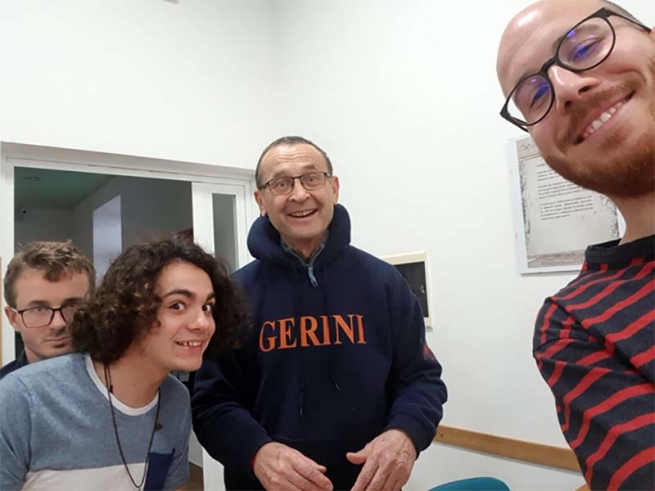 Bro. Magagna with some youngsters, today

(ANS - Rome) - A few days ago the whole world recalled the attack of 13 May 1981 against John Paul II: the Polish Pope was miraculously saved and always attributed his salvation to the intercession of Our Lady. Perhaps, however, not everyone knows that a few days later, on 29 May 1981, it was a Salesian brother who was the victim of an attack by the Red Brigades, and he too was saved due to a series of "fortunate" circumstances, which he, too, attributes to the protection of Mary. On the occasion of the episode's 40th anniversary, that Salesian, Bro. Giuseppe Magagna, granted us an interview.

Brother Giuseppe, what happened that day?

It was 7:40 am on May 29, 1981. The attackers pretended to want me to interview. As I opened the office they told me: "We are RED BRIGADES, sit down." And then I saw the silencer of a pistol.

They started with writing on the wall, but they didn't finish it because the spray can of paint no longer worked. They stuck the usual sign around my neck: "AGAINST ILLEGAL WORK" and more that I do not remember. Then they fired in the right crotch and the gun jammed. With another gun they shot in the right foot and left leg and the second gun also jammed. I shout: "Enough, go away!"

After they left, I called the porter's lodge and told them to close all the gates… And then they rshed me to the Policlinico Hospital.

Why did they single you out, shoot you?

They were probably looking for a person from Management in a spot where it would be easier to escape. In fact, they left the workshop by jumping over the gate that led to the oratory and which had only been opened that very morning: the attack had been prepared for some time.

Is it true that the attackers were chased by students and professors?

Yes, a group of boys tried to chase them, but when faced with the guns the BR drew against them, they stopped.

Did you ever get to meet the attackers? Have you forgiven them?

For forgiveness, of course! One of them sent me a letter in which she acknowledged the social and political error of the group and asked for my forgiveness. I replied that my forgiveness was assured and I invited her to continue her journey back to the society the Red Brigades wanted to subvert.

Did anything good come from that tragic episode?

The fact that on returning from the hospital the kids expressed such esteem and friendship to me was a positive moment: with their behavior in the attempt to chase them and with their kindness towards me, they showed their rejection of violence.

The attack took place a few days before the feast day of Mary Help of Christians. Was it Our Lady who protected you?

Certainly! I have always believed that Someone from above somehow intervened! A spray can that doesn't work, two guns that get jammed ... What should I think?

I believe that for me a field of work was prepared in which I could provide the knowledge, skills, behavior to ensure that the young people I met became “UPRIGHT CITIZENS AND GOOD CHRISTIANS”.