Letter from a Grateful Heart
Featured 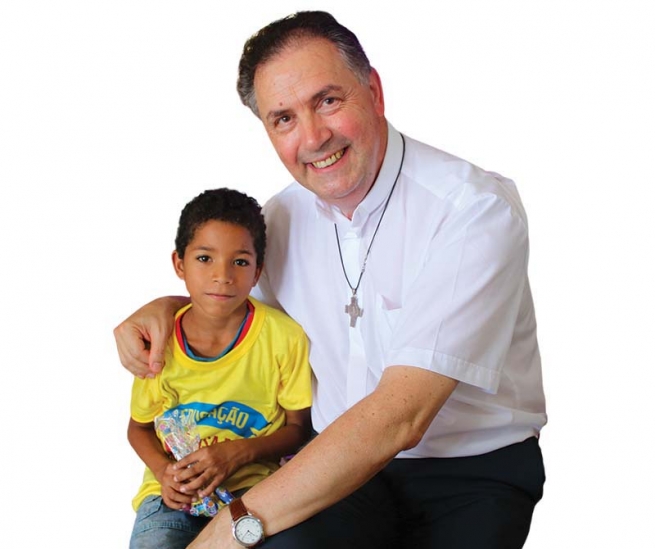 «While straightening my papers and notes, I found an envelope with a letter inside. A young woman had given it to me when I made my visit to the house called “Americana” in Brazil, in the Salesian Province of São Paolo.»

I cordially and affectionately greet you, friends of Don Bosco's charism.

It is with pleasure that I send you my simple contribution each month. I intend it as a greeting that encourages you to continue being together in this “space” that was so dear to Don Bosco, who founded it himself in 1877. In many of the bulletins published during Don Bosco's lifetime (he lived 11 years beyond that founding date of the Salesian Bulletin), he himself gave an account to his readers of what was being done in Valdocco and in other Salesian houses. He thrilled his boys and his readers whenever he could with news that came from America, first from Argentina and then from other nations.

I believe that today we, too, have the duty to stir up excitement for the good that is done by making it known and to be present even in the pain, just as we are at this time. I speak not only of the past 15 long months that we have already been suffering from COVID, but especially of the great suffering now in Brazil and India, especially. This reality must make us always close to the gaze and even the pain of others. This is how life is: there is so much to be thankful for and so many reasons to rejoice mixed with others that make us cry and stand by those who suffer.

Those who have been reading my greetings along these seven years will have realized that I try, above all, to share with you something I have experienced in my life, something of the “miracles” that the Lord has allowed me to discover and see the world over, and to share simple testimonies that touch the heart. This is the one I present to you now:

It so happened that while straightening my papers and notes, I found an envelope with a letter inside. A young woman had given it to me when I made my visit to the house called “Americana” in Brazil, in the Salesian Province of São Paolo.

I remember that during that visit I experienced a very rich and most profound encounter and dialogue with young people, boys and girls between 16 and 24 years old. We spoke, one might say, for two hours about the “human and the divine.” I had a beautiful exchange with about 100 young people from that Salesian house.

When I found the letter, I reread it and told myself that, with Elian's presumed permission, I had to share this simple message from the heart of this young woman who had found a place, a space, and people in a Salesian house and that had changed her life. I thought to myself, “Don Bosco, who was so enthusiastic about making known the good that was being done and how his educational and evangelizing system transformed the lives of his boys, would also be happy to make known what many young people of today say.” Not all are happy, naturally, but many others do feel happiness in these houses of Don Bosco where they have found a playground and friends with whom to share, a school that prepares them for life, a church that helps them come to know God in freedom, and a house that welcomes unconditionally, as happened to Elian.

The difference in my life

In her letter, she writes:

My name is Elian T.S., and I am 17 years old. I am very nervous because, after all, we are not always so honored by the presence and attention of someone who represents those who do such beautiful and great work and who have made such a difference in my life.

I can say that anyone who knows or who even just experiences a Salesian work is never the same again, regardless of their religion, ethnicity, or color. The teachings, values, and affection that are transmitted to us young people have the power to make such a great impact that they leave their mark on us for a lifetime.

I remember coming to Americana in 2005, when I was seven years old. Despite being from a different religious background, I began to get involved in all the delights of knowing and being someone in the Salesian world.  From my contact with Don Bosco’ story and work, I was able to learn more about life, things that very many young people look for in the world but cannot find. I could see that the difficulties of life can be overcome with help, with closeness, and with a smile at the end of an afternoon. I came to know that the priests in this house where I spent much time can be good friends and counselors and that nothing is more beautiful than the action of God in our lives.

I can't say it was always easy. Many times feelings of fatigue and frustration surfaced, and many times I wanted to abandon the difficulties and the work, but, fortunately, like Don Bosco, I met people (whose faces I remember with great fondness), who supported me at all times. They did not “let me go.” They were people who opened their hearts and showed and taught me how to love as Jesus loved and as the Father and Teacher of Youth loved his boys. So, I was able to join the Missionary Team, the Corazón de Jesús (Heart of Jesus) Group, and the Saint Dominic Savio Oratory, where I dedicate my time and which, simply, means so much to me because of the smiles of the children I know and I feel that everything is worth it.

I know that I have been talking a lot, but none of these words that I have spoken or that are written here would be enough to show my gratitude and my affection to this man of faith, who gave himself for us young people and to those who continue to do the same today—the Salesians and the men and women in these houses of Don Bosco. It is wonderful.

Thank you for everything and for being our Rector Major.

There you have the letter from this young woman. I don't know where she is now. Maybe she is in the University or starting another phase of her life. Maybe she has a job, or maybe she is thinking about her future and the plans for her life, maybe, maybe. But what I do not doubt is that what she carries in her heart (and this letter is a small, but precious sample of it) will give her the strength to be a great woman and to give the best of herself to others. That's what education and families are all about: to prepare us for life so we may always give the best of ourselves to others.

May the Lord of Life bless you all.