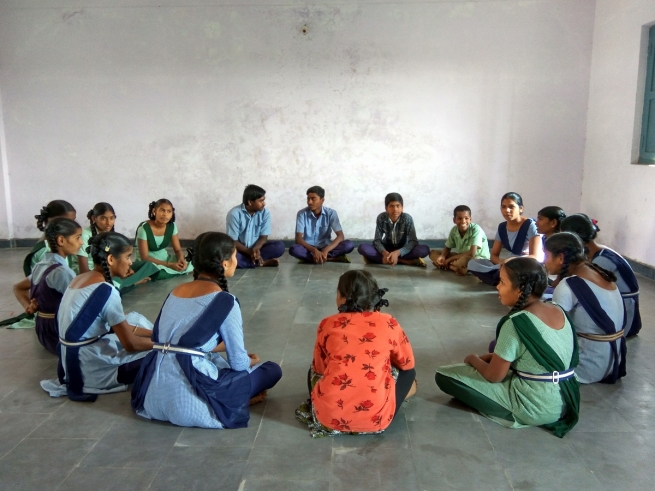 (ANS – Boddupalli) – This story needs to be said. It’s not a story of massive donations received and distributed to the needy during the pandemic. This is the true story of a different kind of “Widow’s Mite”. But a story which was long in the making. Four very young little heroes, school children who are members of our Human Rights Clubs.

Salesian ONG “People’s Action For Rural Awakening” (PARA) has an ongoing program of Human Rights Education in government run schools in the state of Andhra Pradesh and Telangana. Children learn that human rights education is for human rights defense. And, that it’s the right of others more than their own rights that they are standing up for. The pandemic brought out the best in many of them. This is one of the many such stories.

“Bosco Seva Kendra” the Development Office of the St. Joseph’s Province of Hyderabad (INH) is involved in extensive relief operation in many parts of the states of Andhra Pradesh and Telangana. In and around Hyderabad it also collaborated with PARA to reach out to needy children of the human rights clubs established by PARA. One such club is “Baba Saheb Ambedkar Human Rights Club” of Boddupalli village. Here one may recall that Baba Saheb Ambedkar hailed from a family of untouchables yet grew up to become the chief architect of the Indian Constitution.

Prabhu Sharan, Swati, Thirumalesh and Venkatesh are the leaders of the club. When they received the relief kits consisting of mask, sanitizer, toilet articles, food grains, cereals, onions and oil they realized that in their houses they had sufficient provisions for the coming fortnight. They thought of other children who would not have provisions even for the next day. They travelled to Kollapadukal village and gave all their provisions to Mahesh, Akhilesh, Arun and Swatik. Incidentally, they belonged to the “Don Bosco Human Rights club” of Zilla Parishad Government High School. When the parents of the children asked why was it they were handing over to them the relief kits the kids had received, they replied that they had enough for the coming days and it was only fitting that they reached out to those who have nothing.

The children were not sure if the lockdown would be lifted and they would not be running out of provisions for their own families. That did not matter to them. Every day during the school assembly they had been taking the oath “India is my country; all Indians are my brothers and sisters... And in their wellbeing lies my happiness”.

Yes, the two years of working with children before the pandemic in moulding a human rights culture in them, after all was not in vain!