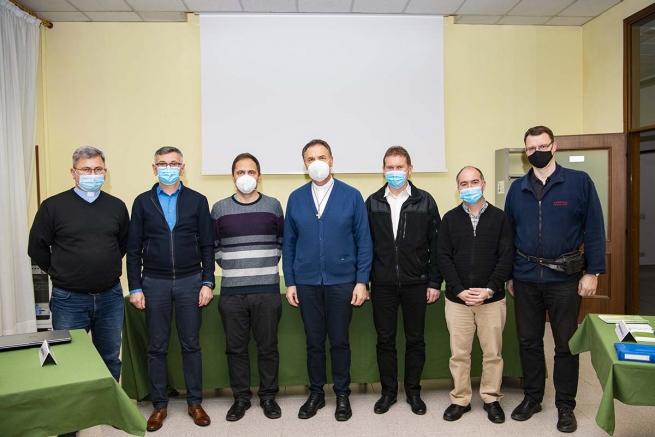 (ANS - Rome) - The Accompaniment Course for recently appointed Provincials is being held from 21 to 31 March 2021 at the Salesian Headquarters in Rome. For ten days, six Provincials of as many Salesian Provinces of Europe have the opportunity to learn and discuss the roadmap for the current six-year term directly with the Rector Major and his Council, while experiencing Salesian communion and getting to know the organisms and the central structures of the Congregation better.

The following take part in the Course, which is coordinated by the Vicar of the Rector Major, Fr Stefano Martoglio:

There are two especially noteworthy elements of this edition of the Course. First, the fact that it takes place in presence. It is, in fact, the first accompaniment course for the new Provincials which is carried out with the live in-person participation of those concerned since after the 28th General Chapter. Although digital meetings are now widely used by the members of the General Council for the animation of Provinces, groups and communities, the possibility of carrying out the Course in person, with all that this modality entails, certainly represents a message full of meanings and an undoubted success for the quality of the meeting.

The second novelty is also linked to this aspect. Normally, in fact, the Course for new Provincials takes place during the plenary sessions of the General Council, in summer and winter; this time, however, it takes place during an intermediate session - while some of the members of the Regional Councilors are engaged in Extraordinary Visits - and precisely for the specific purpose of recovering some of the time spent during these months in which live meetings were not in any way programmable.

The activities and contents of the program remain the traditional ones, aimed at promoting an integral care of the Provincial's person - in his spiritual and pastoral dimension, his physical health ... - and to allow knowledge of:

After the first day of presentation and introduction to the work sessions, the program officially opened on Monday 23 March with the intervention of the Rector Major, Fr Ángel Fernández Artime, who illustrated the Project Guidelines of the six-year term to the Provincials.

Formation then continues in the various appointments and talks with the Vicar of the Rector Major, Fr Martoglio, with the Sector Councilors, Fr Ivo Coelho (Formation), Fr Miguel Angel García Morcuende (Youth Ministry), Fr Gildasio Mendes (Social Communication), Fr Alfred Maravilla (Missions) and Bro. Jean Paul Muller (Economics), as well as with those in charge of other central services of the Congregation.