Italy – "Do this in remembrance of me" (Lk 22:19). Priestly ordination of three Salesians 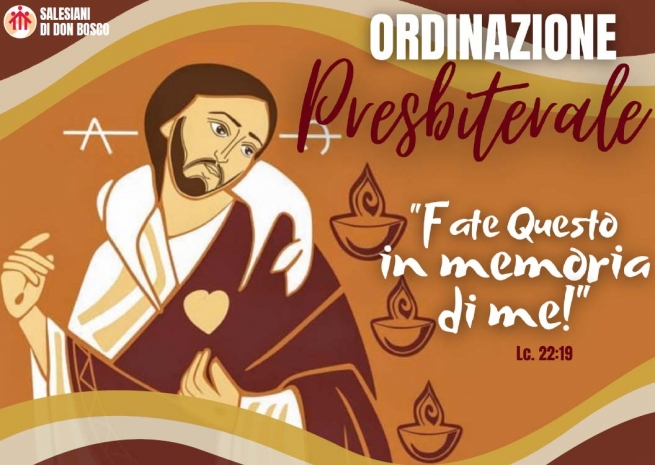 (ANS - Rome) - Next Sunday, 30 May 2021, three Salesian deacons, Fr Rogesious Emmanuel, from Sri Lanka, Fr Mike Okolo and Fr Daniel Omatu, both Nigerians, will be ordained as priests. The celebration will be presided over by Msgr. Guerino di Tora, Auxiliary Bishop of Rome for the Northern Sector, and held at the Parish Basilica of San Giovanni Bosco in Cinecittà, Rome, at 15:30. It shall be broadcast live on ANS.

The stories in their biographies are significant, as they speak of that multiculturalism repeatedly emphasized in his messages to the Congregation by the Rector Major, Fr Ángel Fernández Artime.

Fr Emmanuel was born on 5 March 1989 in Mannar, Sri Lanka, the last of four children of a simple family, with a farmer father and a housewife mother. He attended the Salesian pre-novitiate at home, then, in 2009, as soon as the civil war in his country ended, he had to leave for Tanzania to attend the novitiate, without even being able to greet his parents, who were confined to a refugee camp. After continuing his formation in Tanzania, he returned to his country to carry out his formation, taking care of the approximately 100 young people attending the Salesian house in Murunkan at the time. He made his perpetual vows in 2016 and graduated in Theology from the Salesian Pontifical University in Rome (UPS) the following year. He is currently studying Pedagogy.

Fr Okolo was born on 2 October 1985 in Zaria, northern Nigeria. Since he was a child he has cultivated the desire to serve God, which was manifested at the time in the assiduous attendance of the parish and participation in the small group of altar boys. A pupil of the Salesian Technical School of Onitsha, he trained between Ghana and Nigeria, did an internship at the Salesian Institute of Technology in Ondo, Nigeria, and made his first profession in 2011 and perpetual in 2019. From 2017 to 2020 he worked in several parishes in Rome and in the last year he carried out pastoral activities in the parish of Formia.

Fr Omatu was also born in Nigeria, in Ezekwe to be precise, on 28 December 1988. At the age of eleven he had to leave his family to go to another city to continue his school studies. After a work experience as a receptionist in a hotel, he felt the call to serve God as a Salesian priest. He too was trained between Ghana and Nigeria, and then, since 2015, he continues his formation in Italy, and more precisely in Piedmont, where in parallel with his studies he carries out his mission among young people as a trainee, in the Salesian communities "San Paolo" in Turin and “San Lorenzo” in Novara, as well as in Cuneo, on weekends and for summer camps with young people.

The Mass of their ordination will be broadcast live on the ANS Facebook page and ANSChannel Youtube channel.