RMG – "Salesian Sacrament of Presence" illustrated in Rector Major's third video of: "It's time for Chapter 28" 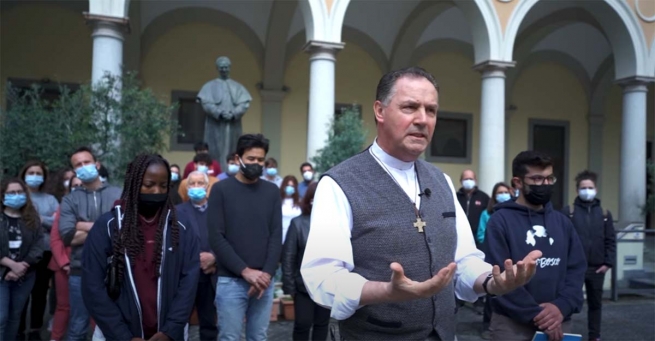 (ANS - Rome) - The third video of the series "It is time for Chapter 28" was published today, 14 June. In it, the Rector Major of the Salesians, Fr Ángel Fernández Artime, explores the third roadmap of the six-year term contained in the document "Post-Chapter Reflections", entitled: "Living the 'SALESIAN SACRAMENT' OF THE PRESENCE".

In the video, surrounded by the young people who animate the "Sacred Heart" in Rome, the Rector Major quotes Pope Francis and the message he sent to the Salesians for the 28th General Chapter (GC28). “the Salesian is a living memory of a presence in which availability, listening, joy and dedication are the essential notes, through which processes are prompted and enhanced. The gratuitousness of presence saves the Congregation from any activist obsession and from any technical-functional curtailment.”

Fr Á.F. Artime also highlighted what was expressed by the same young people who participated in the GC28 in Turin last year, and their appeal to make a journey together with the Salesians.

The X Successor of Don Bosco also affirms that living the Salesian sacrament of presence means maintaining the "oratorian tone" in every Salesian presence, so that every center and work in the world may be "another Valdocco".

It is in this way that the Salesian for today's young people lives his fidelity to the Lord and to Don Bosco.

The video is available - in Italian, Spanish, English, French and Portuguese - in the ANSChannel language channels.