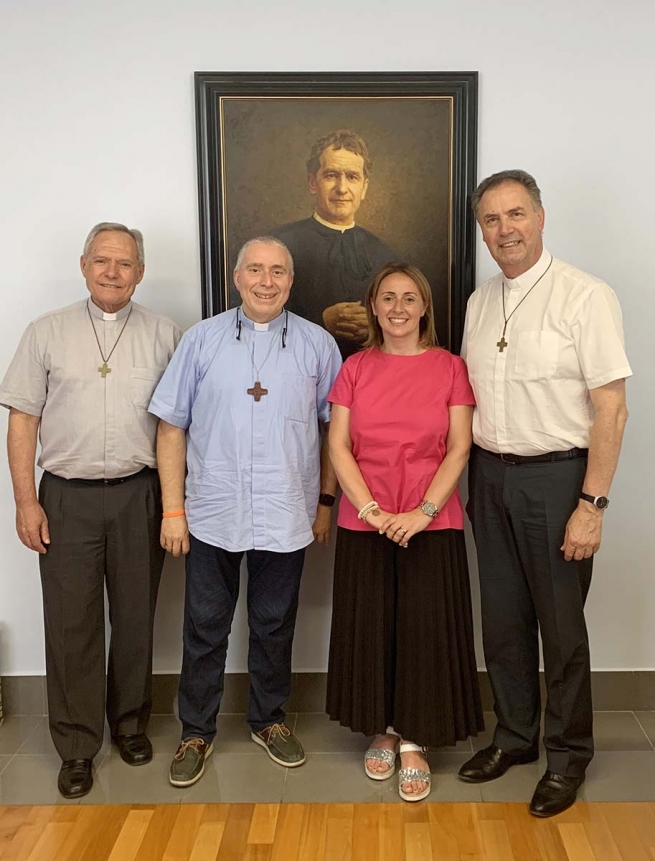 (ANS - Rome) - Yesterday, Wednesday 14 July, at the Salesian Headquarters in Rome, the Rector Major welcomed the mayor of Andria, Giovanna Bruno, a Salesian Cooperator. Marked by great cordiality, the visit was propitiated by Fr Juan Carlos Pérez Godoy, Councilor for the Mediterranean Region, who had had the opportunity to meet her during his Extraordinary Visitation made in recent months to the Southern Italy Province (IME).

Giovanna Bruno is the Mayor of the Municipality of Andria, a town of almost 100,000 inhabitants, located in the heart of Puglia, which since 2009 has become the capital, together with Barletta and Trani, of the Province of Barletta-Andria-Trani. Married and with two children, the 46-year-old lawyer was accompanied on her visit to the Rector Major by Fr Giovanni Monaco, Director of the "San Giovanni Bosco" work that the Salesians have animated in Andria since 1933.

During the meeting with the Rector Major, Mayor Bruno recalled how she met Don Bosco and the Salesians thanks to her family, in particular through her father; and the family environment that she found led her to participate in the oratory and to become a very committed animator, alongside her brothers, who were also animators.

The Salesian formation, accompanied by dedication to her studies in law up to obtaining the title of lawyer, marked her choice to serve others via public institutions. A choice that culminated in her being elected the mayor of Andria last year.

"During my Extraordinary Visitation, when I arrived at the Salesian House in Andria, we had an institutional meeting, and she showed me her thanks to Don Bosco and the Salesians for what she received from them in her life, which brought her to a commitment of personal configuration that is extremely sensitive to Christian and Salesian values,” said Fr Pérez Godoy.

"For this reason, after my meeting I invited her to meet and greet the Rector Major and she welcomed the idea with pleasure from the very beginning," said the Regional Councilor for the Mediterranean.

A meaningful sign of the mayor's "Salesianity", she offers a “good night” to her fellow citizens through her Facebook profile every day, commenting on some events that took place during the day in the light of Don Bosco's charism.