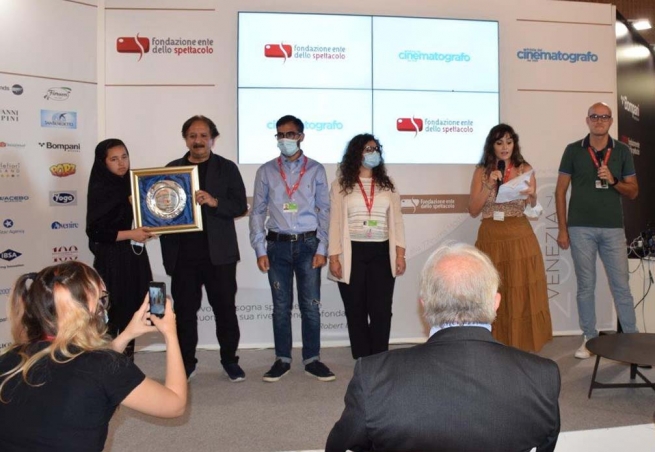 (ANS - Venice) - With the start of the 78th edition of the Venice International Film Festival (1-11 September 2021), a representative of the Salesian association "Cinecircoli Giovanili Socioculturali" (The Social Cultural Cinecircuit of the Young - CGS – APS) will also be present from Tuesday 31 August for their customary participation in the Festival itself and for the work of cultural animation linked to the critical cinema studies promoted within the Laboratorio Venezia Cinema (The Venezian Cinema Workshop).

For over forty years, the Laboratorio Venezia Cinema has been one of the most interesting moments of national CGS formation, precisely due to the concomitance with the world's most prestigious and "oldest" Film Festival and the opportunity to participate from the privileged perspective of accredited persons.

For 24 years, now this Cinema Workshop has been associated, as a Jury-participant, with the task of judging and awarding the "Magic Lantern Award", one of the Film Festival's much covetted among Awards, to films on issues related to growth and education.

This year, 30 persons of cultural significance will take turns at this workshop, distributed in two shifts, from the Italian regions of Marche, Sardegna, Lazio, Liguria, and Puglia. All these jury members will be the animators of communication and culture belonging to the Salesian Youth Socio-cultural Cinecircuit environments, and mostly aged between 18 and 27 years. The whole event is held with the contribution of the Directorate General for Cinema and Audiovisual Arts, a wing of the Ministry of Culture.

Besides viewing the films scheduled in the various sections of the exhibition, the young people will be involved in a daily discussion with various figures of contemporary culture, also through operational training on the language of cinema, which will take the form of writing reviews and film charts published in the “Fuori dal coro” (The Externs Voice) section of the website www.sentieridicinema.it and available immediately.

On this site, in the framework of the project "Sentieri di Cinema" (Trails of Cinema), the critical materials produced by the CGS laboratory in Venice and the photographic documentation of the event which have been collected for years is recognised and has been supported by the Marche Region. Some of those in charge, therefore, will lend their support remotely in a tested work of editorial desk.

These activities, which serve as preparatory steps towards the acquisition and maturation of specific skills, will have practical repercussions in the programming of the Sale della Comunità (community halls), in the organization of film festivals, in the animation of film clubs and in training activities related to the language ​​of new media as well as in the wider coordination of young jury members at other national events such as the Giffoni Film Festival.