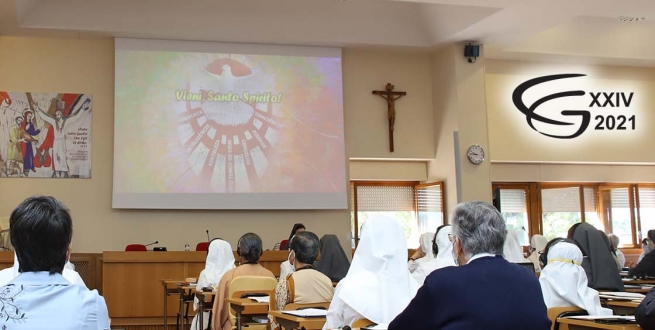 (ANS - Rome) - After the days of silence, study and discernment, the voting to identify the other sisters called to support the new Mother General, Sister Chiara Cazzuola, as her councillors, is now advancing at a rapid pace at the 24th General Chapter of the Daughters of Mary Help of Christians. After the election of Sister María del Rosario García Ribas as the Vicar General, on Wednesday 6 October, the following were voted on Thursday 7: Sr. Nilza Fátima de Moraes, Brazilian, as General Councilor for Formation; Sr. Runita Galve Borja, from The Philippines, confirmed for a second six-year term as General Councilor for Youth Ministry; and Sr. Leslie del Socorro Sándigo Ortega, Nicaraguan, former collaborator in the area of the Salesian Family, was elected General Councilor for the Salesian Family.

Sr. Nilza Fátima de Moraes was born on 25 November 1965 in Natividade da Serra, São Paulo, Brazil. In 1979 she went to study in Lorraine at the so-called "Domestic School". In 1985 she began the Novitiate and on 24 January 1987 made her Religious Profession and was sent to the Community of Santa Inês in São Paulo. After serving in various FMA houses in Brazil, in 2000 she specialized in Catechesis at the Faculty of Education "Auxilium" for three and a half years.

Returning to Brazil at Christmas 2004, she worked in various communities as a teacher of Religious Education, Youth Ministry Coordinator, Community and School Director, and as the Formator of Aspirants and Postulants. From 2008 to 2013 she was Provincial Councilor. From 2014 to 2020 she was Provincial Vicar, and in 2021 was appointed Provincial of the Brazilian Province of Our Lady Aparecida (BAP).

Sr. Runita Galve Borja was born in 1966 in Manila, Philippines, and has been an FMA since May 23, 1992. She was an animator in various formal and non-formal educational institutes and provincial coordinator (FIL) for Youth Ministry. She has a master’s degree in Theology and Youth Ministry. From 2004 to 2014 she was a Collaborator of the Youth Ministry Sector, before being elected the General Councilor of the same sector at GC 23rd of 2014.

Sr. Leslye Sandigo was born in the village of Diria near the city of Granada in Nicaragua. She studied at the 100-year-old "Mary Help of Christians" Institute, and it was there that she felt the desire to serve the Lord while participating in the ceremonies of sending the missionaries.

She entered the aspirantate in 1984 and made her religious profession on January 6, 1988. She worked at the “Mary Help of Christians” Secondary Institute in Granada, at the “Maria Mazzarello” Center in Managua, and at the “Mary Help of Christians” Lyceum in Costa Rica. After her service as Provincial in the “Our Lady of the Angels” (CAR) Province, which includes Costa Rica, Nicaragua and Panama, she was appointed as the World Delegate for the Salesian Cooperators, a position she held from 2012 to 2020.