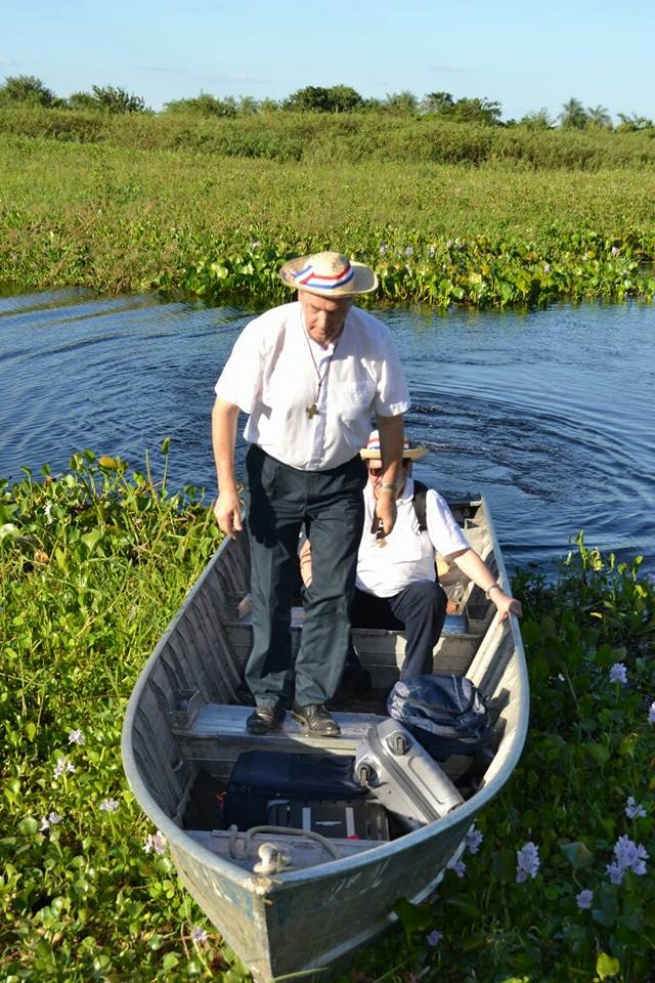 (ANS - Fernando de la Mora) - The Rector Major, Fr Ángel Fernández Artime, continues his Animation Visit to the "Maria Santissima Assunta" Province of Paraguay. During this time, he has visited a number of Salesian centers of the Province and in every place the emotional response of the many children, young people and the local population for such a welcome presence has been clearly visible and moving. Father-like, Fr Á.F. Artime has been greeting and talking to everyone, made himself available for photos and, despite the tiredness due to the hours and hours of travel on winding roads and program changes, he has always kept a smile for all those approaching him.

Despite the heavy rains and the lack of suitable roads, the Rector Major continued his intense program of travel for and throughout the Apostolic Vicariate of Chaco Paraguayo, visiting the mission lands the Salesians and the Daughters of Mary Help of Christians have been traveling for over 70 years. Msgr. Gabriel Narciso Escobar Ayala, SDB, bishop of the Apostolic Vicariate, thanked the Rector Major for fulfilling his promise to visit the Chaco, the indigenous communities and the inhabitants of the villages scattered throughout the mission areas.

Saturday May 5, the X Successor of Don Bosco began the day in Puerto Casado, visiting the historic community radio station of the Salesian missionaries, "Quebracho Poty", where he was able to dialogue with the missionary priest Martín Rodríguez.

Subsequently, under the pouring rain, in an area of dirt roads, he reached the Community of Castile where, accompanied by Salesian missionaries active in that area, he met the indigenous maskoy population.

Yesterday, Sunday 6 May, he arrived at the "San Domenico Savio" parish of Fernando de la Mora. During Mass, celebrated outdoors, before thousands of faithful, the Rector Major said that in our lives "it is God who has the last word". At the end of the Eucharist, the young people animated a moment of celebration and were able to take some souvenir photos with Fr Á.F. Artime.

In the afternoon, the Rector Major, accompanied by his Secretary, Fr Horacio López, by Fr Natale Vitali, Councilor for the America South Cone Region, and Fr Néstor Ledesma, Provincial, participated in a meeting with the Salesian Family in the Salesian Institute of Mary Help of Christians.

With this visit, the 10th Successor of Don Bosco continues to encourage and animate Don Bosco's spiritual Sons and Daughters to continue their mission among young people.