Vatican - Synod, Fr Á.F. Artime: "Being a real father or mother for children, one of the great services we must continue to give" 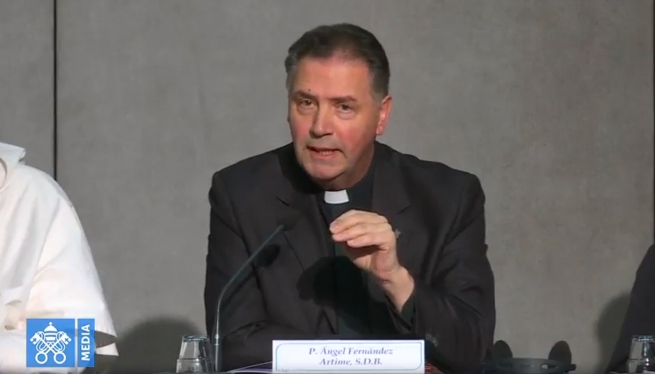 (ANS - Vatican City) – Among the guests invited to the daily briefing for journalists reporting on the Synod of Bishops on Youth, on Monday 22 October, the Rector Major of the Salesians, Fr Ángel Fernández Artime also intervened. The assembly's general environment, the requests of young people, the expectations on the final document and where to provide answers, some of the topics dealt with in his quick talk.

Thus, at the Vatican Press Office, the Rector Major began by recalling the episode - which he also narrated to the Synod Fathers - of his meeting with several Colombian youths who knew nothing of either the Synod or the Bishops. Fr Á.F. Artime again wished to underline the episode to point out that the Synod must not address or turn to an elite of young people, but to all young people, in their true and concrete daily lives.

He then highlighted "the sense of universality of the Synod", something to which the Rector Major is accustomed, thanks to his experience in the General Chapters; and yet the Synod offers an even broader perspective. In this sense, he added, the risk of an excessively Euro-centric or view related to the “Western world” alone must be avoided; but he also said he was confident that the final text shall be able to account for all the wealth and heritage presented.

Responding to a question on this topic, he added that the statistics presented at the Synod showed how young people in Europe are the ones with less hope and confidence in the future, and this is also a matter to be discussed.

In particular, the Rector Major insisted on the need for testimony: "The voice of the young awakens us ... The young people have asked us to have the courage to bear witness." But it does not concern only bishops or priests, he added, because: "We need adults as testimony even beyond the men of the Church, because in the world there is a great lack of fatherhood and motherhood."

In view of the future journey with the young, Fr Á.F. Artime reiterated that the Church's action towards young people must know how to articulate itself through the many channels available: "We must continue to give answers, not only in the parishes ... There are schools, oratories, youth centers, shelters for street children. The vision is broader: in these spaces, which are familiar to me as a Salesian, a (sense of) maternity and paternity, true and genuine, mature and healthy, can be created. Sometimes an educator is a friend, or he must be a brother to the boys ... But being a real father or mother for the young is one of the great services that we must continue to give."