Japan – “Fr Ángel, thank you very much and see you next time!” 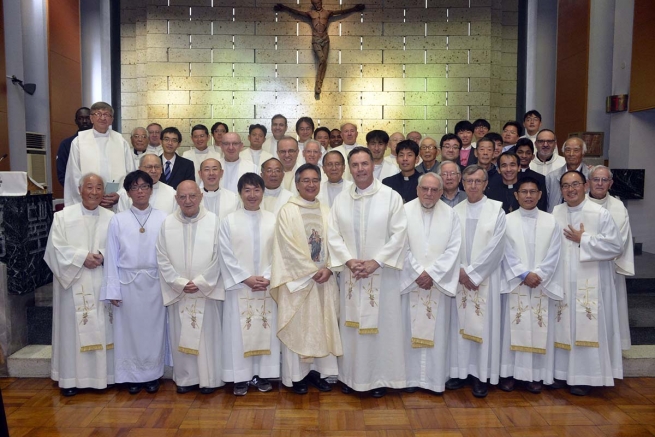 (ANS – Tokyo) – After five full days of meetings and activities, the Animation Visit of the Rector Major, Fr Ángel Fernández Artime, to the "Saint Francis Xavier" Province of Japan came to an end. Yesterday, Monday 12 November, a central moment of every visit of animation took place: the paternal meeting of the X Successor of Don Bosco with the Salesians of the Province.

On Monday morning, 12 November, the Rector Major met with Salesians of Japan at the Chofu Seminariate. Around 45 confreres participated.

In his talk, Fr Fernández Artime, further to his participation in the recent Synod of Bishops, made an objective analysis of the reality of the Church and of the Congregation. And besides highlighting the numerous insights they bring into the world, he referred also to other real issues and crises in the Church and in the Congregation, showing data and statistics with concrete examples, making an earnest call on the confreres to become mature Salesians to serve the young. He also urged and encouraged the confreres to have a vision for the future and make responsible and decisive choices as a Province.

Later that day, the Rector Major visited “Salesio Gakuin” (Salesian High School) in Yokohama. About 900 junior and senior high school students and about 50 teaching staff welcomed him. In the meeting hall, the students gave presentations: a musical performance by the brass band; the juggling club “Giocoliere” performed their tricks; a performance on a Japanese banjo “Tsugaru-jamisen” by one of the teachers.

This was followed by a Q & A session of the Rector Major with the students. Fr Fernández Artime answered each question of the four representatives in a sincere manner with students listening attentively.

Finally, the Rector Major visited a sick confrere in a hospital and gave encouragement.

Fr Fernández Artime finished his visit to Japan on the early morning of 13th November, and has departed for the next destination: South Korea. About 30 members of the Salesian Family in Japan (from SDB, FMA, SCG, ASC, EXDB and SYM) came to Tokyo Haneda Airport, expressed their appreciation of the Rector Major's visit and offered their fare well.

“Fr Ángel, thank you very much for your giving us a lot of joy and encouragement! See you next time!” were their warm words.