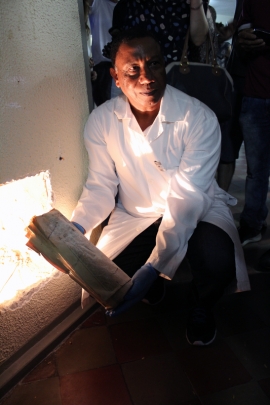 (ANS - Campinas) - January 31, for the feast of Don Bosco, was a day of great expectations at the social center "São João Bosco" of Campinas for the past pupils of the semi-boarding house "São João", together with directors and staff of the social center "São João Bosco", who met for the opening of a "time capsule" - a bottle inserted in the pedestal of a bust of Don Bosco – which had been sealed in 1954.

The historical artefact was a sort of local legend: the "São João" boarding house was founded in 1909 and offered its school services and meals to generations of students of different social classes until 1994, when the center was converted into a center for social assistance. It had always been said that a "time capsule" was kept in the bust of Don Bosco, but there were no official records or data capable of confirming this tale.

Then, on the afternoon of January 31st, the past pupils of the "São João", together with the members of the current social center "São João Bosco", gathered to start the commemorations for the 110th anniversary of the center (festivities culminating next June) and proposed to find out what was inside the "time capsule."

Thus, after the celebration of the Eucharist, the current Director of the social center, Fr Orivaldo Voltolini, and the former Director of the "São João", opened the cavity where the time capsule was located. Angélica Barbosa, historian and coordinator of the work, and Luís Monteiro, restorer of the institute's patrimony, led the different phases of the procedure, ensuring that the documents and the objects were treated with all the due and necessary care. In the end, the capsule was extracted; inside: a glass bottle full of historical documents of the institution, a copy of the newspaper Diário do Povo of 17 March 1954, and a photographic film roll.

Also inside: messages from students, a note from the Spanish Mint, a scapular, objects of everyday school life, an oratory card, a register with student grades, a description of the center at the time, and the names of the director of the boarding house, the mayor of the city and even the Pope in office in 1954.

With the "time capsule", part of the Salesian history of Campinas and its service to the education of young people has come to light.