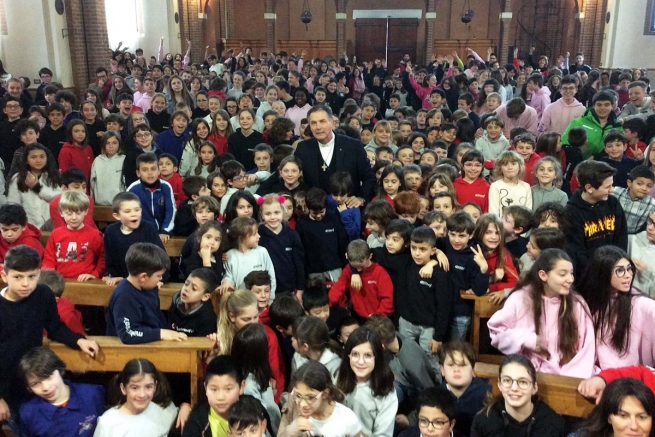 (ANS - Mestre) - The Rector Major of the Salesians, Fr Ángel Fernández Artime, yesterday, Monday 18 March, concluded his visit to the Salesian Province "San Marco", of North-East Italy. After the big party on Sunday in Jesolo, yesterday was dedicated to the meeting at the Provincial headquarters of Mestre with the INE Province Council and to the visit to the Salesian house of Mogliano Veneto.

If in the morning the gathering with Fr Igino Biffi, Provincial, and his council, was an important moment for listening to the challenges of the Province and to offer one's vision on the life of the Congregation globally, the highlight of the afternoon was lived in the Auditorium of the Salesian Institute "Astori" of Mogliano Veneto, with the meeting addressed to the laity of the houses of the North-East Province who hold positions of responsibility within the various Salesian realities.

"It was nice to see familiar faces so excited and enjoying the words of the Rector Major, who with his charisma was able to give precious advice to all those present," said participants. The intervention of the Rector Major constituted in a study and search for clarity on the present situation and on the orientation to be taken for the future.

Awareness and loving kindness: these were the two essential elements indicated by Fr Á.F. Artime, to live the Salesian reality today and to be able to operate in the full spirit of Don Bosco.

The meeting took place in the debate mode with questions prepared by every present Salesian reality. In the pressing truth for answers, the fervent passion of a man who strongly believes in the power of union, in works, between laity and Salesians was noted.

This appointment ended with the traditional greetings and many selfies, after which the X Successor gave an interview to the youths of the "Cube Radio" (radio host, Francesca Marchese; photo and video, Giacomo Mescalchin and Lorenzo Barutta), the radio station of the Istituto Universitario Salesiano Venezia (IUSVE), and offered concrete and convincing answers to current and deeply felt questions among today's youth. Finally, he went to the Community of Mogliano Veneto, a Salesian community that welcomes young people in vocational discernment and accompanies them in their search for God's will and in experiencing the Salesian charism.

Thus the Animation Visit of the Rector Major in INE ended: "three days" of commitments, promises, answers and so much Salesian charism.