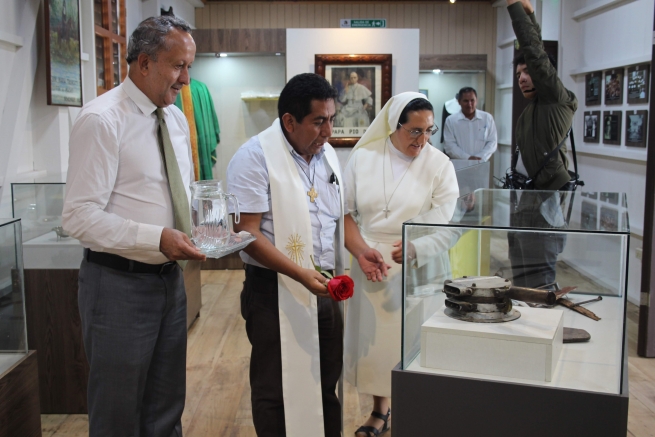 (ANS - Sucúa) - Even after so many years, Sister Maria Troncatti continues to be a model for the life of a religious of these times; it is enough to note that Pope Francis elected her as a witness of the Pan Amazon Synod. To commemorate the greatness of this saint, the blessing of the museum of Sister Maria Troncatti in the city of Sucúa took place on the eve of the commemoration of the 50th anniversary of her ascent to heaven. This site was built so people can learn about the life and missionary passion of this Salesian nun who first arrived in Ecuador in 1922.

The ceremony was attended by: Sister Cruz María Piña, FMA Provincial; Fr Ángel Lazo, Vicar of the Salesian Province of Ecuador; Enrique Delgato, Mayor of the Sucúa canton; several Sisters of the Provincial Council and a good number of people who came from various cities from across the country to visit and learn about the religious museum.

Sister Cruz María Piña said that a museum has the objective of showing what has been done in life and the echo that these actions have in eternity. "Everything we find in this place speaks of her great love for God which made her exclaim: 'Every day I am happier in my religious and missionary vocation ...'. Let us live this experience of contemplating the life and mission of Blessed Sister Maria Troncatti."

Before opening the museum's doors to the public, there was the cutting of the ribbon by the FMA Provincial, which was followed by Fr Lazo blessing the premises. The museum displays objects and photographs that visually present the journey of Sister Mary, especially together with the Shuar people.

One of the museum's spaces is dedicated exclusively to her work as a nurse, as she was a "doctor" for the body, but also for the soul. She did not devote herself exclusively to treating pains or treating illnesses, but for each of her "patients" she always had advice and an evangelizing word.

Fr Lazo underlined the Blessed's love for the missionary life and urged the young people present to commit themselves to following her example of life and go where God calls them. He also said that Sister Troncatti was designated as the "Protector of young volunteers."