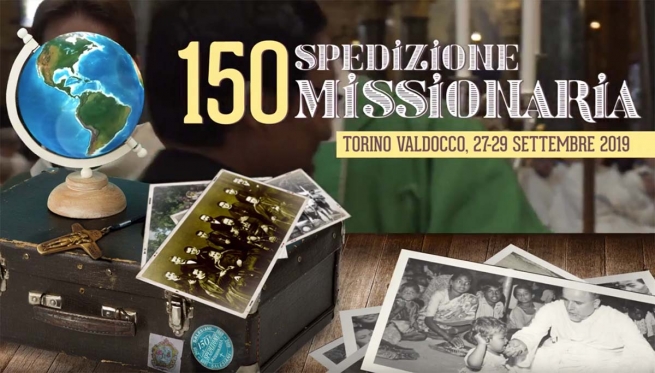 (ANS - Turin) - From 27 to 29 September, the traditional missionary appointment with the Harambée will take place in Turin - Valdocco, which this year will be enriched by an important anniversary: ​​the 150th missionary expedition. 36 Salesians and 13 Daughters of Mary Help of Christians will receive the missionary cross from the hands of the Rector Major, Fr Ángel Fernández Artime, during the celebration in the Basilica of Mary Help of Christians.

Don Bosco's missionary dream continues, after 150 years, thanks to the commitment of the 36 Salesians who will receive the missionary cross. 9,523 missionaries have been sent avroad in 150 expeditions. "We must respond generously to the Lord: if today the Salesian charism lives in 134 nations, it is due to confreres like these who have brought the Gospel into the world by educating the young," said the Rector Major.

To underline the importance of this anniversary, during the days of the Harambée there is a Salesian re-reading of the testimonies of Salesian holy missionaries together with the presentation of the departures, before the large celebration in the Basilica of Mary Help of Christians.

The event will start on Friday 27 September with the welcome of the participants, followed by an introductory moment. The following day, Saturday 28 September, there will be the awaited inauguration of the Missioni Don Bosco Ethnographic Museum intended to make the knowledge of the missionary world increasingly accessible to the pilgrims of Valdocco. At 2 pm, Fr Ángel Fernández Artime shall bless this new space, which was built in the structure of the Mission Office. It contains many objects from the daily life of ethnic minorities that the Salesians have encountered over the years in mission lands.

Also present at this missionary feast will be the Superiors of various Italian Salesian Provinces and the participation of Salesians and FMA of the Provinces of origin of the departing members is foreseen.

On Sunday 29 September it will be possible to follow the presentation of the participants at 9.00 am and the Holy Mass at 11.00 am on the ANS Facebook page. The live broadcast is available in three languages: Italian, Spanish and English.