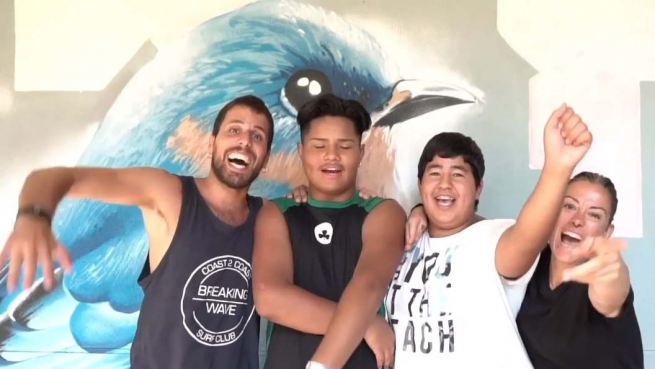 (ANS - Girona) - A group of young people from the Salesian Social Education Platform "Sant Jordi - PES Girona", together with their team of educators and with the collaboration of the youth space "Güell Espai Jove", produced a hip-hop song , with a video, entitled "Tot ho podem canviar" (We can change it all). The aim of the artistic work, presented in the first edition of the "monar'T" Festival, is to break with stereotypes due to fears and prejudices towards different cultures and races, and to claim equality and dignity for all.

The young singers express themselves in Catalan, Spanish, French and Arabic and the texts in the video are subtitled and translated to show the importance of the cultural richness that languages ​​and cultures bring.

"Tot ho podem canviar" is part of the "Neu" initiative, a socio-educational project to raise awareness about diversity and intercultural reality, developed by the Salesians of the "Sant Jordi" work in Girona, Lleida, Mataró and Sant Boi de Llobregat. The objective of the "Neu" project is to raise awareness of the reference communities, and especially the young, to the richness of a diversified and plural society, promoting models of social cohesion based on intercultural coexistence.

The genesis of the song saw the group of young people being highly motivated since their very first meetings. They felt that the best means for their purpose was to adopt hip-hop, because in the course of its history, the musical style best served as a vindictive and critical tool for everything that society does not like.

Once the objective and the instruments were clear, the educational team started looking for different associations and collaborators to work with. Thanks to the collaboration of three sound technicians and two professional collaborators, two workshops were then organized: one, to create the music for the theme, taking into account the tastes and preferences of young people; and the other, to write the lyrics, which the youths involved also composed.

The video was then produced with the collaboration of a student of the "Eram" University School, during two sessions in the two districts of Girona Can Gibert del Pla and Santa Eugenia.