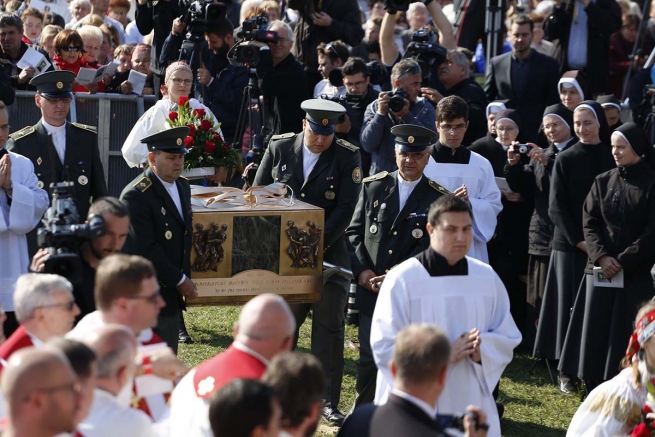 (ANS - Bratislava) - "To donate life for the brothers was the ideal of Blessed Tito Zeman. He was arrested because he helped seminarians and priests to expatriate to live their apostolic ideal. His imprisonment was transformed into a sacrifice of redemption for others." These are some of the passages of the intense homily expressed by Cardinal Angelo Amato, SDB, representative of the Pope and Prefect of the Congregation for the Causes of Saints, during the Eucharist celebrated on Saturday, 30 September, in Bratislava on the occasion of the beatification of Titus Zeman, Salesian priest, martyr.

An event of the Church and the Salesian Family that saw the participation of 25,000 faithful, 25 archbishops and bishops, about 500 priests, 200 seminarians. With Cardinal Amato, among the chief concelebrants were the Archbishop of Bratislava, Mgr. Stanislav Zvolenský, Rector Major, Fr Ángel Fernández Artime, Slovak Cardinal Jozef Tomko and Apostolic Nuncio, Msgr. Giacomo Ottonello. There were two sisters of the new blessed and several relatives.

A moment of particular intensity was experienced with the rite of beatification. Following the official request of the Archbishop of Bratislava, accompanied by the Postulator General, Fr. Pierluigi Cameroni, SDB, and the Vice-Postulator, Fr Jozef Slivon, SDB, Cardinal Amato read the Apostolic Letter with which Titus Zeman is counted among the blessed, and his liturgical memory celebrated on January 8, his dies natalis.

On the following day, Sunday, 1 October, it was the community of Vajnory to render thanks for the beatification of Fr Zeman. Vajnory is the district of Bratislava where Fr Titus was born on 4 January, 1915, where he was baptized and confirmed, where he celebrated the First Mass and concluded his life on earth on 8 January, 1969.

In the solemn concelebration, presided over by Msgr. Zvolenský, the Rector Major preached the homily and emphasized the timeliness of Fr Zeman's testimony, also in reference to "the preparation and celebration of the next synod dedicated to the theme: young people, faith and vocational discernment. Fr Titus, through clandestine passages, has somehow embodied those fundamental steps in the process of discernment."

In the afternoon the relic of the new Blessed was placed in a side altar of the parish church of Vajnory. Even Pope Francis, at the end of the Angelus, paid homage to the new Blessed: "He joins the long line of martyrs of the twentieth century... His testimony supports us in the most difficult moments of life and helps us recognize, even in hardship, the presence of the Lord."