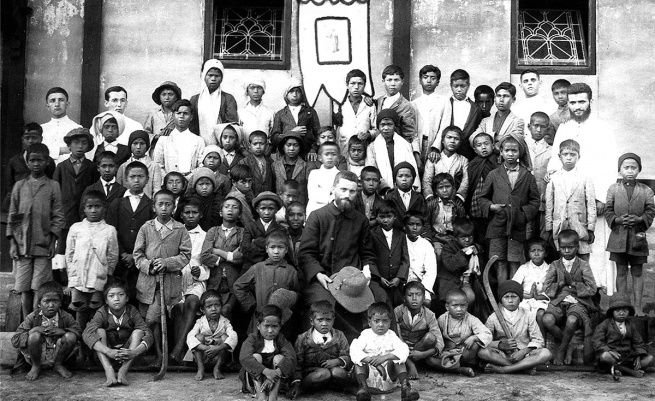 (ANS - Rome) - Costantino Vendrame was born in San Martino di Colle Umberto, in the diocese of Vittorio Veneto (Treviso) on 27 August 1893. His parents Pietro and Elena Fiori taught him to love work and sacrifice and above all the Lord. From an early age, Constantino distinguished himself by his intelligence and his goodness. He completed his high school studies in the seminary of Vittorio Veneto and in 1913 he put into practice his dream of becoming a Salesian and entered the novitiate of Ivrea.

After a first experience in the oratory of Chioggia, he was called to serve his country, participating in the First World War (1915-18) with other Salesian confreres who, like him, emerged from this harsh experience further tempered in body and spirit. Ordained priest in Milan, in March 1924, he received the missionary crucifix in Valdocco in October, in the Basilica of Mary Help of Christians, and on November 30 he left for India. On December 23 he is in Shillong, in Assam, a mountainous area to the north-east of India, under Tibet, on the border with China, between the Khasi and Yaintia tribes.

He had the task of approaching the area's inhabitants and in less than a year he was appointed parish priest of the city. Visiting the villages, reaching the "outskirts" via rough and tiring mountain paths, meeting families and children without distinction of ethnicity and religion, starting Salesian oratories to make Jesus and his Gospel known was his mission, one he lived by giving himself wholly for the glory of God and the salvation of souls until the very end of his life on January 30, 1957, at Dibrugarh. Near legendary not only the number of conversions and baptisms he administered, but also the fruit of his extraordinary mission that still continues to inspire amazement. Prayer was the secret of his strength, love for the Sacred Heart of Jesus and Mary Help of Christians the inspiration of all his works.

Both his native city and the Diocese of Vittorio Veneto cultivate a great devotion to their fellow countryman and promote the Cause of his Beatification that also involves the young and keeps alive the missionary zeal and the commitment to announce today the Gospel that so distinguished Fr Costantino.