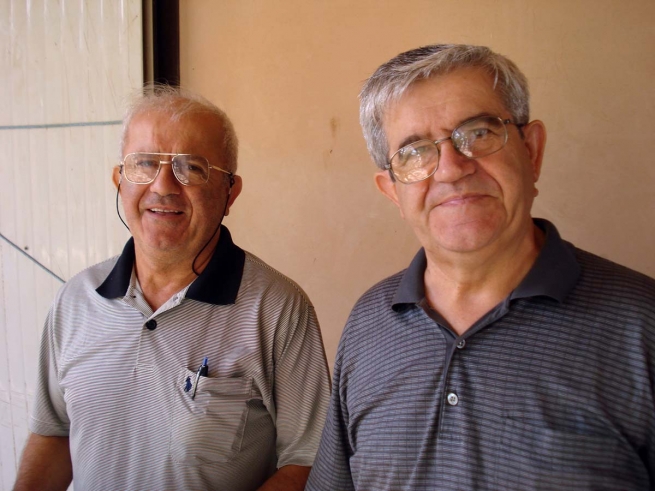 From left to right: Salesian Brothers Giacomo and Andrea Comino

(ANS - Turin) - For a man who is 80 years old, 60 as a Salesian brother, 46 as a missionary in Asia and Africa, there was certainly more than one moment in which what happened had the flavor of providential intervention of God the Father. This is the experience of Bro. Andrea Comino, a Salesian missionary, a pioneer of vocational training in Asia and Africa.

His first destination outside Italy was the Philippines in 1975, where he had to make an effort to learn the local language, Tagalog.

Then off to Cambodia in 1992 when the country was struggling to find a balance after the war with Vietnam and the folly of the Khmer Rouge. Here too, the sign of Andrea Comino's passage is the foundation of vocational schools that then grew to gain national prestige, such as the one in Sihanoukville for tourist-related services.

He returned to the Philippines between 1994 and 1997 to start the new school in San José, on the island of Mindoro. But when a person has that innate special gift of being a pioneer, it is difficult for him to stay long and enjoy the development of what he has implanted. The next leap, in 1997, brought him to Nigeria.

In truth, it was to replace a sick Salesian. But together with his brother Giacomo, also a Salesian brother, he was involved in the request for "someone" willing to go to a country with a dominant Muslim majority, namely Sudan.

The school experience soon intertwined with the war events affecting the country. Many young refugees reached Khartoum to seek survival, while the school that the Salesians had taken over from the Comboni Missionaries could only accommodate 10% of the enrollment applications. After many difficulties and a first failed attempt to erect a branch, the Salesians started the construction of a vocational training center in El Obeid, suggested by the apostolic administrator Antonio Menegazzo, a Combonian, convinced by the Salesian skills expressed in the capital.

Four thousand square meters of classrooms and workshops for teaching general mechanics, auto-mechanics, hydraulics, metal-cutting and welding, carpentry and electrical installations, came to life in just a year and a half. "They gave their all," recalls Andrea Comino, who involved the instructors of the Khartoum school so as to have the maximum guarantee not only of their expertise, but also of their passion. "The school of El Obeid has nothing to envy similar ones in Italy," he added.

The experience was useful for Andrea Comino to face two other extreme challenges together with his brother Giacomo: the territory of Darfur, devastated by war, had to be reborn to give a future to the youngest; and South Sudan, made independent from the north, had to rebuild itself starting from basic education. In both cases the "formula" was the construction of welcoming schools for children and teachers. And the miracle, says Bro. Andrea, was able to find the large sum necessary to carry out the projects.

At the age of eighty, Bro. Andrea Comino still has the desire to work for the poor populations of Africa.