Spirituality Day of the Salesian Family 2022

(Rome, January 12, 2022) – The 40th edition of the Spirituality Days of the Salesian Family (SFSD) opens tomorrow, January 13, 2022. This edition will be held in mixed mode - in presence in Turin-Valdocco, and with digital connections - from 13 to 16 January 2022. As usual, the SFSD will focus on the message that the Rector Major of the Salesians of Don Bosco has given to the 32 groups of the Salesian Family as inspiration for the new year - the so-called "Strenna of the Rector Major" - a message that for this 2022 is inspired by St Francis de Sales, on the 400th anniversary of his death, and which is summed up in the motto: "Do all through love, nothing through constraint".

The purpose of the GSFS is to revive Salesian Spirituality in its fundamental dimensions, suggested by the Strenna of the Rector Major, and in a spirit of communion with the 32 Groups of the Salesian Family.

This 2022 edition of the Days will be experienced on two levels:

- Worldwide with international live broadcasts from 13:00 to 15:00 (UTC + 1) from the Teatro Grande of Valdocco; the Rector Major, Fr Ángel Fernández Artime, will always participate in these central moments, flanked by other world leaders of the various groups of the Salesian Family.

- and Regional with a specific program, and different times and methods, drawn up by the various regional teams.

A limited number of 190 representatives of the different groups of the Salesian Family, always in compliance with the anti-contagion regulations in force, will then also have the opportunity to participate in the activities that will be carried out at the local level: Eucharist, daily Rosary, Adoration of the Blessed Sacrament, visits to the Don Bosco House Museum ...

The program of worldwide activities – that will all be broadcast live by ANS on its Facebook page, in five languages ​​(Italian, English, Spanish, French, Portuguese) –  includes:

On Friday 14 the epitome of the activities shall be reached with the round table on the spirituality of Saint Francis de Sales by various experts in the field: three Salesians (Fr Michele Molinar, Fr Eunan McDonnell, Fr Giuseppe Roggia), a well-known journalist, Vania de Luca, and Sister Maria Grazia Franceschini, of the Order of the Visitation of Saint Mary, an order founded by Saint Francis de Sales, will address topics such as: Salesian spirituality, the spiritual affinity between Saint Francis de Sales and Don Bosco, the "grace of 'unity' in the ecstasy of life and action, religious life according to the holy bishop, and the relevance of his spirituality for the laity today as a path of holiness accessible to all. The day will be completed by the intervention of Fr Pierluigi Cameroni, Postulator General for the Causes of Saints of the Salesian Family, on Salesian holiness.

On Saturday 15 the sharing of the group work carried out in the first two days at the regional level will be broadcast and commented, and two significant experiences of Salesian spirituality in action will be presented, one from youth and one from laity. For the participants on site in Valdocco, Saturday will also be the day of the inauguration of the exhibition for the 400th anniversary of the death of St. Francis de Sales at the Casa Don Bosco House Museum in Turin.

Eventually, on Sunday 16, the celebration of the Eucharist from the Basilica of Mary Help of Christians in Turin, presided over by the Rector Major, and the final farewell stand out.

Finally, the special space that will be dedicated to the laity of the Salesian Family, called to offer the thoughts of the "Salesian goodnight", deserves to be emphasized.

Further information and updates will be available on the websites www.infoans.org/en and www.famigliasalesiana.org/en

The Salesian Family is an ecclesial reality spread throughout the world bringing together 32 officially recognised religious institutions and movements inspired by the charism and apostolic mission of the Founder St john Bosco. It operates in all five continents and employs 200,000 committed religious and lay people.

(Rome, January 15, 2021) – The Salesian Family Spirituality Days 2021 start today, Friday 15 January. In a new, digital way, they will shed light on the message of the Strenna for 2021: "Moved by hope: 'See, I am making all things new' (Rev 21,5)". From today until next Sunday, 8,000 people, from the 32 groups of the Salesian Family can take part in the appointment, made with a skilful mix of common parts for everyone, between 13:00 - 15:30 (UTC +1), and specific programs developed by the appropriate regional/linguistic coordinating bodies. This is a major organisational and communication effort, with offices all over the world (Rome, Lisbon, Madrid, Brasilia, Chennai, Quito, plus Vietnam and East Timor) and simultaneous translation into over a dozen languages.

The start of the common activities is expected with the opening session, prayer and the presentation of the Strenna 2021 by Fr Á.F. Artime; the regional work has already started: at 9.30 am, Italian time, the live broadcast, and the work of groups in East Asia-Oceania.

With his introductory speech, the Rector Major illustrates in detail the invitation that he himself has formulated to the entire Salesian Family for this 2021, "before a global reality that challenges us and that we cannot ignore".

Msgr. Derio Olivero, Bishop of Pinerolo, was invited offer a reading, under the banner of hope, of the time that all humanity is experiencing.

On the sidelines of the common events, the various activities coordinated by the language and regional centers are scheduled, including the unmissable appointment with the virtual tour of the "Casa Don Bosco Museum".

On Saturday 16 the common session will continue and, on the same channels indicated above, there will be a live broadcast starting at 1 pm of: “The voice of the Groups of the Salesian Family in the world”. “We will focus above all on sharing the "testimonies of hope" lived in the Salesian Family: we will listen to how members of different groups and countries have brought hope in times of pandemic, they will talk to us, through videos, these willing young people from all over the world, and we will commemorate credible witnesses of hope in difficult times” the Central Delegate of the Rector Major for the Salesian Family, Fr Joan Lluís Playà.

Parallel to the common work sessions, those divided by language will be held and managed by the various coordination centers. The Italian language group starts on Friday 15 January at 5.30 pm; the French and English language sessions at 4 pm, the Spanish language at 6 pm and, finally, the Portuguese language session begins at 9 am the following Saturday.

The Sunday program, on the other hand, will be uniform for all, with the closing Mass presided over by the Rector Major at 12.30.

Since the first edition of the Week of Spirituality of the Salesian Family it is the first time in history that so many people can participate in the appointment. This is already a first testimony of that hope that the Salesian Family is preparing to deepen and celebrate. In an era of crisis and pandemic, the members of the Don Bosco Family are able to get closer as never before, transforming a problem into an opportunity: thanks to modern technologies, but above all in communion of prayer and rooted in a common charism.

Thanks to the joint work of ANS and IME Comunicazione, the joint works are all visible, with commentary, on the ANS Facebook page and on ANSChannel. 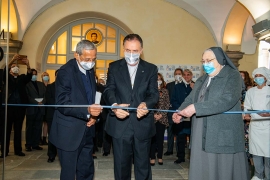 (Turin, October 6, 2020) – The 27th General Chapter asked the General Superior of the Salesian Congregation, the “Rector Major”, and his Council, to take over the Salesian sites and make them something special for the Salesian world. That consignment gave rise to a new reality: the Don Bosco House Museum, which was solemnly inaugurated in Turin-Valdocco with three days of events this past weekend.

Instead of the "Don Bosco's rooms - Camerette", where one could see Don Bosco's presence in Valdocco, today visitors can now get to know Casa Pinardi, the first settlement of Don Bosco's Oratory, in detail. “Here, in these corridors, 11 people have passed that today the Church recognizes as venerable, blessed or saints: this means that Valdocco was a school of humanity and holiness and we want to transmit this heritage to the world,” said the Rector Major, Fr Ángel Fernández Artime at the press conference to present the new museum.

The Rector Major also announced that, to enhance Valdocco as the custodian of Salesian historical memory, the most important documents of the origins of the Congregation will be transferred from the Central Archives to the Don Bosco House Museum.

Also at the press conference, the art critic Vittorio Sgarbi, a past pupil of the Salesian institute in Este, spoke. “There are various types of saints. In many the human dimension is sublimated by canonization, while Don Bosco remains human, it is difficult to call him St. John Bosco... ” As for the new exhibition “with effective solutions,” he observed: “There are no Tiepolo, Picasso or Giotto, but a story: the story of life, education, books read, holy cards, worship ... ”

The second day, Saturday 3 October, was instead dedicated to institutional authorities. In addition to the Rector Major, Anna Laura Orrico and those responsible for the architectural works and the museographic and museological projects also took part. The rich parterre of prominent figures saw the presence of the Ambassadors of several Latin American countries strongly marked by the Salesian presence, such as Ecuador, Panama, Costa Rica, Colombia, Guatemala, Brazil, Mexico and El Salvador.

Finally, Sunday 4, after the Solemn Eucharist presided over by the Rector Major in the Basilica of Mary Help of Christians, the "Don Bosco House Museum" was opened to the public.

“We have tried to represent this long journey of youthful holiness, starting from 1846, inside the Don Bosco House Museum ... The Salesian community of Valdocco is pleased to make this precious pearl available to all of you and the world will testify to the greatness of Don Bosco,” said Fr Cristian Besso, head of the museum project, together with the Director of the Museum, Stefania De Vita.

The Rector Major then carried out the symbolic cutting of the ribbon, flanked by Mother Yvonne Reungoat, Mother General of the Daughters of Mary Help of Christians, and by his predecessor at the head of the Congregation, Fr Pascual Chávez.

Photos and videos of the events are available on ANSFlickr and ANSChannel. 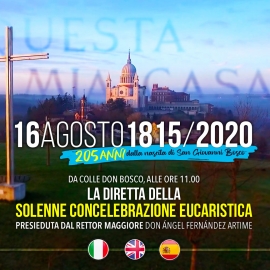 (Rome, August 3, 2020) - August 16 is always a special feast day for the Salesian Family: it is, in fact, the day on which the anniversary of Don Bosco's birth is celebrated. Also this year, which marks the saint's 205th birthday, a solemn Eucharistic concelebration is scheduled, which will also be visible online and which will be celebrated at the Basilica of Colle Don Bosco, in Castelnuovo Don Bosco, where the "Father and Teacher of Youth" was born.

For all those who wish to attend, but cannot be physically present, the Eucharist will be broadcast live by ANS on its Facebook page (with commentary in three languages - Italian, English and Spanish) and on ANSChannel on YouTube where it will remain available for viewing online even at the end of the live broadcast.