RMG – The ministry of the Salesian Rector: a compass for the community 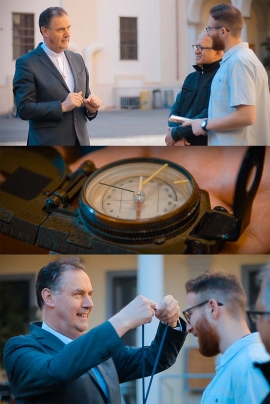 (ANS - Rome) – "Animating and governing the community - The ministry of the Salesian Rector" as a compass for the communities. Thus Fr Ángel Fernández Artime, Rector Major, defines the new document, which, with the additions received during the GC28, has reached its definitive edition, 34 years after the previous Salesian Rector's Manual.

The video interview conducted by the young post-novice Ignazio Coniglio with the Rector Major and Fr Ivo Coelho, Councilor for Formation, helps us to better understand this gift, which Fr Á.F. Artime has promised to offer to every Salesian.

It is, in fact, the process of ongoing formation to which all communities are invited, especially in this first year after the Chapter.

Among the questions that Ignatius asks, there is also this: "Can we offer an instrument that is good for everyone, considering the variety and diversity present in our Congregation?"

"I say yes. Not to do the same, all the same things at the same times in our complex and very large Salesian world. But yes, to know what is the direction to follow. At the center are the Constitutions and Regulations. As for this instrument, it seems to me like a compass. The compass in the sea – and I'm saying so as a son of a sailor – the compass is the instrument that tells you what is the good direction to follow in order to reach back home to enter the safe harbour.

It is different from a GPS. The GPS, as Pope Francis says, is an instrument that does not serve as a reference for life. In life, we ​​did not know what we will find before us day after day, moment by moment.

And it is the reason why as a community, rector and confreres, we must first of all live with a deep sense of faith; then seek a great communion among ourselves; at the same time, accept that there is always a brother among the brothers in the community who does the service of guidance, of mediation, who accompanies us in discerning."

In addition to the introductory video, available on YouTube in the Italian original version and in English, French, Spanish and Portuguese versions, other materials have been sent to all communities to facilitate its reading and sharing among the confreres.

Subsequent videos and materials will be sent again at an interval of about 3 months, to gradually introduce the reading and analysis of each of the three parts of the text:

2. The director in the Salesian religious community.

3. The director and the shared Salesian mission.

HYPERLINK to the package of links to: [1] video interview with the Rector Major and Don Ivo Coelho, [2] text of the video, [3] power point  presentation of the document, [4] handout  for community sharing and other animation materials related to the presentation of " Animating and governing the community The ministry of the Salesian Rector".