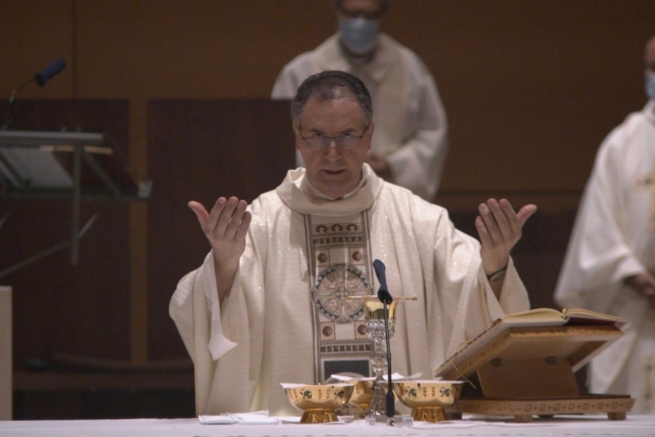 (ANS - Turin) - On the feast day of Don Bosco, for the anniversary of his birth (16 August), the Rector Major took part in the Eucharistic concelebration which was held at Colle Don Bosco, in the temple dedicated to the saint. Usually it is the Vicar's task to preside over these moments, but the particularity of 2020 led Fr Ángel Fernández Artime to decide to choose the feast day to propose the final document of the 28th General Chapter of the Salesians, held in the Motherhouse of Valdocco.

The challenges encountered in the work of the more than 230 delegates from 134 countries are such as to require special emphasis in the place that saw the birth of Giovannino and the maturation of his vocation at the service of young people. "It was not only the birth of a precious life, like every human life, but a life that had a plan in God," the Rector Major specified in his homily. 205 years ago, the event took place that marked and marks a decisive change of pace for the Church and society towards the new generations.

The condition of young people changes with the succession of events and according to geography, and sometimes this places them in a condition of uncertainty, of expectation, of repression. "With Don Bosco we reaffirm the preference for poor, abandoned youth, who most need to be loved and evangelized," underlined the Rector Major in his words to the faithful who went up to the Colle and to those connected via streaming.

Anchoring to Don Bosco and his school of life and faith is the starting point reaffirmed by the last General Chapter, which examines and proposes 8 major objectives to be pursued in the new six-year term. The first of these is the emphasis on the charism of the Saint of Youth, of which the Congregation is the interpreter in the present. And together with this the awareness that the point of arrival of the Salesian service must be to bring people to meet Jesus. In fact, taking up the beautiful prayer that the predecessor, Fr Pascual Chavez, presented on the occasion of the recognition of the body of Don Bosco in view of the worldwide pilgrimage of his relic, Fr Ángel Fernández Artime wanted to add the request to Don Bosco to "have his same faith in order to be able to bring the best to young people for them, and the best is God."

It is a question of meeting the children "battered" by life so that their desire for redemption can be pursued thanks to those who become their friends and "take care of them." In his homily, the Rector Major then added: "Don Bosco was not born like this, but he made himself like this." The Salesian can feel encouraged by this consideration, which suggests a "method" and which at the same time undertakes to allow himself to be shaped by service: "his boys made Don Bosco what he was," remarked the Rector Major.

Finally, the proposal of the "pre-novice song" that the choir, made up of young people from all over the world who aspire to become "Sons of Don Bosco", sang at the end of the celebration is significant and meaningful: the declaration of commitment to serve young people.