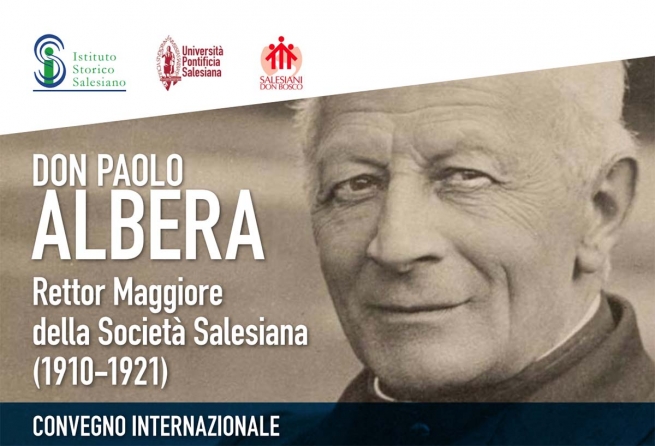 (ANS - Rome) - On the occasion of the year that the Rector Major, Fr Ángel Fernández Artime, has dedicated to Fr Paolo Albera - Don Bosco's second Successor at the head of the Congregation - on the first centenary of his death (Turin-Valdocco, 29 October 1921), the Salesian Historical Institute (ISS) and the Salesian Pontifical University (UPS) have organized an international conference dedicated to rediscovering and deepening the figure and legacy of Albera. The conference is scheduled on 30-31 October 2021 at the UPS headquarters and will feature live streaming and translations into English.

The sessions shall start in the early afternoon of Saturday (2:00 pm - UTC + 2) with the greetings of the Vicar of the Rector Major, Fr Stefano Martoglio, followed by the introduction of the coordinator, Fr Francesco Motto, member of the ISS.

Subsequently Fr Thomas Anchukandam (ISS Director), Fr Stanislav Zimniak, Fr Francesco Motto, Sister Grazia Loparco FMA, professor at the "Auxilium" Faculty, and Bro. Ariel Fresia - all members of the ISS -, shall illustrate different facets of Fr Albera's life and work: they will analyze the contexts in which he lived, his commitment to transmit the charism, the development of the Congregation during his rectorate, the relationship with the FMA, the growth of the missions in America, and much more.

After an in-depth study on Fr Paolo Albera in the difficult context of the First World War, the first day will end with an assembly debate and a conclusino by Fr Ivo Coelho, General Councilor for Formation.

On the second day of the conference, which will also open at 2 pm (UTC + 1, with the return to solar time), new authoritative scholars will deepen other relevant aspects concerning this fundamental character in the history of the Congregation and the Salesian Family: Fr Joe Boenzi, (professor at the Dominican School of Philosophy & Theology in Berkeley United States), will speak about Father Albera as a formator and Spiritual Director; Fr Aldo Giraudo (Professor at UPS), of his Director's Manual; Sister Eliane Petri FMA (of Auxilium), of the formative contribution offered to the FMA Institute; Fr J. Pudumai Doss (lecturer at “St. Paul's University” of Ottawa - Canada), on Fr Albera and the First Code of Canon Law; Giovenale Dotta, CSI, (of the Giuseppino Central Archives of Rome), of the image of Fr Albera in the Salesian Bulletin; Bro. Paolo Vaschetto, SDB, (of UPS), of the photographs relating to the Second Successor of Don Bosco; finally, Fr Petr Zelinka (from the Salesian Central Archives), will deal with the sources about Fr Albera.

After the usual debate, the conclusions will be entrusted to the historian Andrea Riccardi, professor emeritus of the "Roma Tre" University, with final greetings from Fr Andrea Bozzolo, Rector Magnificus of the UPS.