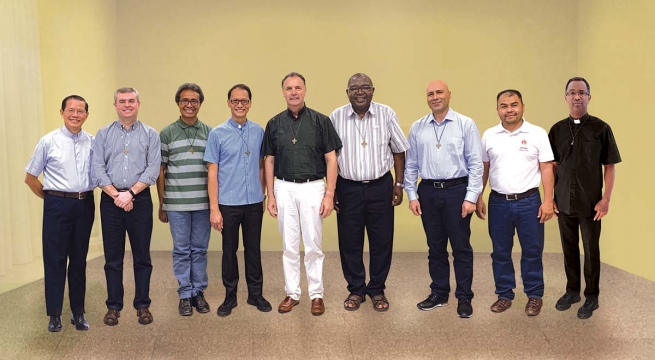 (ANS - Rome) - The Intermediate Session of the General Council is underway from 3 to 13 October 2021 at the Salesian Headquarters, Rome, which sees the in-person participation of the Rector Major, his Vicar, and the Sector Councilors. Just as it was last spring and to make up for the time lost due to the Covid-19 pandemic, the course for the New Provincials Provincials is also being held along side-by-side with the participation of seven Provincials from three Continents.

The seven Provincial Superiors are:

The current course is the third edition since the outbreak of the pandemic. In these three meetings - March, June and October 2021 - one can already glimpse a positive trend towards the full resumption of the government and animation activities of the Congregation: in March, in fact, there were six participating Provincials, all from European Provinces; in June, seven participated from the American continent. This time, there are Provincials exclusively from non-European countries.

This formation course, however, maintains its usual structure, aimed at transmitting the timetable or roadmap of the Congregation and the Action Plan of the current six-year period to the Provincials; to allow Provincials to share with the Congregation’s upper levels their concerns and the challenges they face every day in their work; to deepen the fundamental juridical elements for the exercise of animation and the government of the Provinces; to know the structures and activities of the Sectors of the Congregation, as well as of other central bodies (the Secretariat for the Salesian Family, the Postulation for the Causes of Saints of the Salesian Family, the ISS, the institute for Salesian history); and to share a time of spiritual upliftment, a renewal, and to revive the sense of belonging to the one Salesian Mission.